Peaceful Protests Turn Violent: When Will It Be Enough? 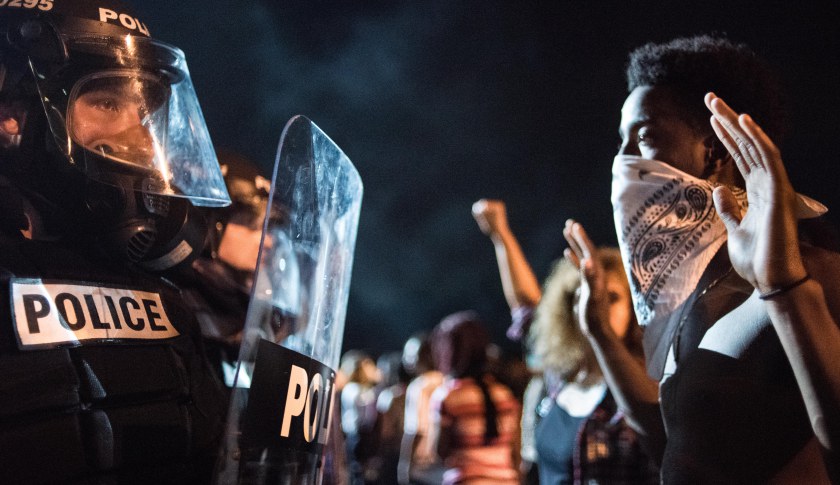 Police officers face off with protesters on the I-85 (Interstate 85) during protests in the early hours of September 21, 2016 in Charlotte, North Carolina.

Three weeks ago a new hashtag and male’s name popped up on trending topics on Twitter. #KeithLamontScott was shot and killed near the University of North Carolina at Charlotte. Some say he was armed, some say he was reading a book.  This has sparked huge speculation on what actually happened the day of the shooting. Residents took to the streets to protest another killing of a black man at the hands of the police. What started as a peaceful protest eventually became violent as sadness and rage had no where to go but out onto the streets.

The protest turned into a riot with people looting stores, street clashes, and gunfire which left many in critical condition through out the days that followed. The anticipation that there would be another riot was in the air; local police were joined by state troopers and National Guard in anticipation of violence. Businesses and offices told their employees to stay home.

There were many casualties during the riots. People are still feeling the after effects of those fatal three days in Charlotte. United States Army veteran David Palmer was beaten during the riots. He was hospitalized later that night. According to WBTV, “Palmer was jumped by ten men who were attacking people and looting businesses around the EpiCentre.” Palmer received multiple injuries including a fractured eye socket and many broken bones in his face. Palmer received surgery October 3rd and is out of work while he heals.

A week and a half ago, Charlotte Mayor Jennifer Roberts called upon lawmaker in the state of North Carolina to revoke HB972, the law “will make it impossible for officials to [release police footage] without a court order and is a significant step backward for transparency and police-community relations,” she said in a statement.

Protesters have demanded that Mayor Roberts and Police Chief Kerr Putney release the video. According to ABC News, “The police attorney told The Associated Press that much of the video of the shooting is too gruesome to release to the public.”

60 years ago, Martin Luther King Jr. said these words, “Always avoid violence. If you succumb to the temptation of using violence in your struggle, unborn generations will be the recipients of a long and desolate night of bitterness, and your chief legacy to the future will be an endless reign of meaningless chaos.” The words are as needed today as when they were first uttered six decades ago.