It’s the Most Wonderful Time of the Year: NBA Season Begins 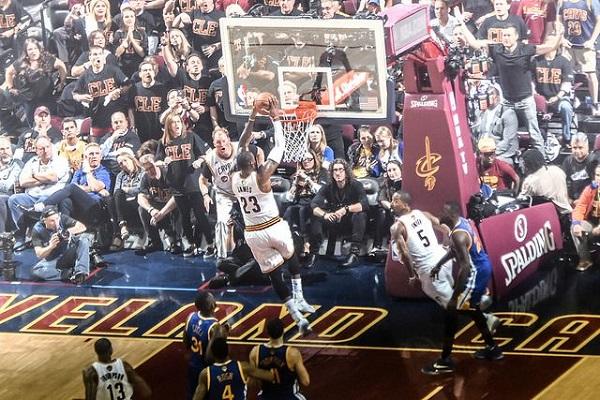 LeBron James looks to win the Eastern Conference and give his home town another chance at all title.

The drought is over. Starting tonight there will be three games on television featuring both NBA conference champions; the Cleveland Cavaliers face off against the New York Knicks. The Golden State Warriors face the San Antonio Spurs. (The Jazz face the Trailblazers…no one is going to even watch that game, though.)

Here is what you have to look forward to this season:

The Hawks are coming off a year where they lost to the Cavaliers in the Eastern Conference semifinals. They took a step back by trading Jeff Teague and losing Al Horford to free agency. Dwight Howard is a solid center, but he is no upgrade to Al Horford.

The Celtics took a first round exit to Al Horford and the Hawks last year. By adding Al Horford they seem to be able to take a significant leap in the standings this year.

The Nets missed the playoffs last year and were one of the worst teams in the NBA. They added Jeremy Lin, role players, and still have a talented center in Brook Lopez but they don’t seem to have enough talent to make a playoff push.

The Hornets made the playoffs last year but were narrowly defeated in the second round by the Miami Heat. Key losses for the Hornets were Jeremy Lin, Courtney Lee, and Al Jefferson. By adding Roy Hibbert and Ramon Session they have a huge decline in talent on their roster.

They Bulls were a team that made a lot of big off season moves by trading their star point guard and hometown kid Derrick Rose, and adding a whole new core to their team. Their new core includes Dwyane Wade, Rajon Rondo and keeping their star Jimmy Butler. The Bulls will most likely make the playoffs, but they will ultimately loose in the first or second round.

The Cavs made no key additions this off season. They are still a very solid team with LeBron James, Kyrie Irving, and Kevin Love at their core, but their lack of off season additions may come back to bite them in June.

The Dallas Mavericks added some key additions with Harrison Barnes and Andrew Bogut but it does not seem like it will be enough to take the Mavs over the top this season to make the Western Conference Semis.

The biggest off season move by the Nuggets was drafting guard Jamal Murray. With such a young core and lack of talent and playoff experience it will most likely be a tough year in the mile high city.

The Pistons were taken out in the first round last year in a sweep by the Cleveland Cavaliers. By playing the eventual champs in the first round this gave them great playoff experience and they are expected to take the next step this year.

The Warriors lost in the NBA Finals last year in Game 7 after losing a 3-1 lead for the first time in NBA history. By adding Kevin Durant they add a ton of scoring but by losing Andrew Bogut they lose their rim protector. The Warriors defense will likely take a step back this year while their offense will become much more efficient.

The Rockets lost to the Warriors last year in the first round of the playoffs. The loss of Dwight Howard will most likely not affect them too much but the additions of Ryan Anderson and Eric Gordon their shooting will be even better than last year. They are expected to be an average Western Conference team.

The Pacers made the playoffs last year and with the key additions of Al Jefferson, Jeff Teague, and Thaddeus Young they seem like they will be able to maintain a playoff spot in the stacked eastern conference. The Pacers will not be able to make a deep run in the playoffs because they don’t have the star power needed to compete with the Cavs.

The Clippers were bit by the injury bug last year in the first round of the playoffs by losing Blake Griffin and Chris Paul to a knee and hand injury. They will have a good regular season but will fail to go deep in the playoffs because they have never seemed to be able to perform in the playoffs.

The main accomplishment last season for the Lakers was being so bad that they got the second pick in the NBA draft and picking Brandon Ingram. The Lakers will be much improved from last year but with a team this young and inexperienced they are not expected to be great next year at all.

The Heat had a great playoff run last year losing in 7 games to the Toronto Raptors in the Eastern conference semis. With the huge loss of their franchise’s super star Dwyane Wade and losing Chris Bosh to life threatening blood clots , it certainly looks like this will be a tough season for the Heat.

The Bucks did not make the playoffs last year but have a very promising young team. With the editions of Mathew Dellavedova and drafting Thon Maker they may be a playoff team in the Eastern Conference.

The Timberwolves have one of the most young and promising rosters in the league right now. With drafting Kris Dunn the Timberwolves will be a fun team to watch this season despite not being in playoff contention.

The Pelicans did not make the playoffs last year and will probably not this year. With drafting an up and coming star in Buddy Hield the Pelicans will still be on the rise in the next few years.

The Knicks added a lot of talented pieces this season like former MVP Derrick Rose, and Brandon Jennings. The Knicks will be a sleeper team in the Eastern Conference because their starting lineup can match up with any starting lineup in the NBA and their young bench will keep the pace of the game fast.

The loss of Kevin Durant will really hurt the Thunder this year but by adding Victor Oladipo, and still having a superstar in Russell Westbrook, the Thunder will still be a solid team.

The Magic did not make the playoffs last year but with a young core and the additions of Bismack Biyombo and Serge Ibaka, the Magic have potential to be a solid team.

The 76ers have been a horrible team the last couple of years, and it will not change this season. On the bright side, they are getting Joel Embiid back on the court from an injury that has kept him out his entire career and the draft choice of young and talented Ben Simmons, who will miss the season due to foot injury, will make them an up and coming team for the next few years.

The Suns are another up and coming team that will be a force to be reckoned with in the future. With the young core of Devin Booker and Eric Bledsoe the Suns will be a mid-tier team.

The Blazers were able to get past the Clippers in the first round last year eventually losing to the Western Conference Champion Warriors. With the young and talented core of Damien Lillard and CJ McCollum the Blazers will be a sleeper team this year.

The Kings franchise has been in a ton of turmoil lately and will not be able to get out of the gutter of the NBA. The bright side for the Kings is that they have a very talented center in DeMarcus Cousins and they might be able to get a top five pick in next year’s draft.

The Spurs are a powerhouse: a great organization and a great team. They brought in Pau Gasol last summer and hope he will fill future Hall of Famer, Tim Duncan’s roll. Their question mark this season is can they get past the new look Warriors? Or can they beat the Thunder?

The Raptors are coming off their best season in franchise history winning 56 games and losing to the eventual NBA Champion Cavaliers. They will take a step back this season because they lost a key rim protector in Bismack Biyombo.

The Jazz added some key players last off season with George Hill, Boris Diaw, and Joe Johnson. They will be able to make a playoff push but will most likely lose in the first round.

The Wizards have enough talent to make it to the playoffs but their depth is definitely in question. With no real solid off season moves, the Wizards will be a solid team but their lack of depth will hurt them.