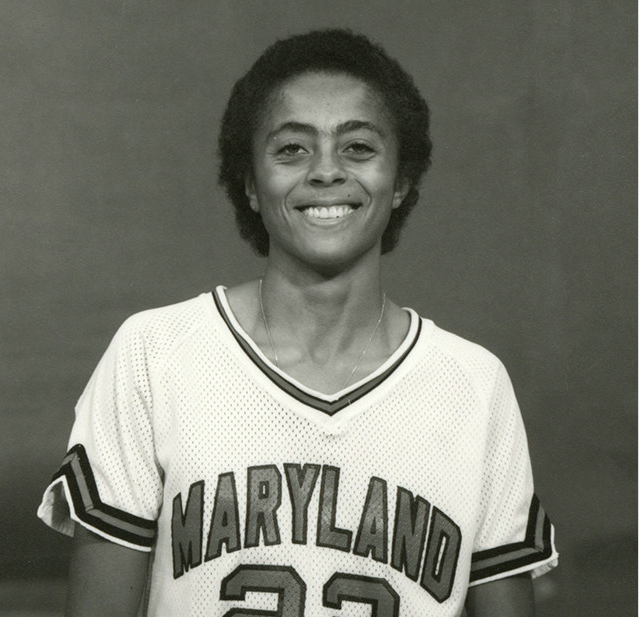 Ms. Rich in 1984 at the University of Maryland.

Ms. Richardson is a well known Wakefield institution.  She is the Girls Basketball Coach; anyone that has seen her pacing up and down the sidelines of the court during a Basketball game knows that. Not everyone knows that our own Coach Rich played basketball for the University of Maryland AND for the United States’ Women’s national team!  Coach Rich is being inducted into the University of Maryland Hall of Fame on Friday for all of her accomplishments on the court and for women athletes everywhere.

Coach Rich has always loved the game.  When asked how the game changed her life, she said, “basketball has been like a gateway to success for me.” She’s not wrong! This dynamic player ranks 8th in all time scoring for the University of Maryland with 1,630 points. She’s included in the ACC Legends team, was a starter for three ACC titles, and lead the Terps to the final four in 1982. “It was incredible to know that I had the opportunity to play in the first final four in Women’s basketball…it was very surreal. ”

Coach Rich is from a small farming town in North Carolina and always loved playing the game. “After we would be finished in the field, I always went and played with my brothers, despite my mom wanting me to wash the dishes and do some house work. I just wanted to play. My brothers always let me no matter what, but we weren’t playing against kids…we were playing against grown men.” This helped her get ready for college ball.

When Coach Rich went to Maryland, she credits a lot of her success to Coach Weller, the Women’s basketball coach. “Coming from a family with 13 kids…Coach Weller really helped me emotionally adjust to life away from home.” Coach Weller was very successful averaging 20 wins per season in her 26 years as Terrapins head coach, winning eight ACC titles, and guiding the team to 3 Final Four appearances.

When I asked her what she remembered most as a player, she shared a memory from when she was on the National team. The team was in Belgrade, Yugoslavia which is now current day Serbia. “We were out at night going to these beautiful castles , but to get into the castles we had to jump this wall. One of our teammates was this huge 6 foot tall, 200+ pound girl who we had to lift over this wall; as we were exploring the castles, we heard a noise….[everyone] ran except for me. I stayed back and made sure my teammate made it back over the wall. So here I am, this skinny girl…had to lift this huge 200+ pound women up in the air all by myself.”

Her drive and determination to succeed is truly inspiring to any athlete. Hearing where she came from and how much she worked to make her dreams a reality is truly amazing!

What is the greatest challenge for a female athlete? Rich said, “fighting for women athletes everywhere and fighting against the grain of the usually male dominated college sports world are hard…also trying to stay the student athlete and trying to keep the respect of everyone.”

Coach Rich is being inducted into the University of Maryland Hall of Fame on Friday. When I asked how she felt when she got the call telling her she was going to be in the HOF, she smiled and said, “I’m still trying to stay calm! I was with Coach Hogwood, coming home from a conference this summer when I got the call, I thought [the caller] was kidding…just playing with me, but when I realized that he wasn’t, I got really emotional and thought about my upbringing and all the sacrifices my mother and family made for me.”

Congratulations on this huge achievement, COACH! We love you! #Warriornation is in awe of you.