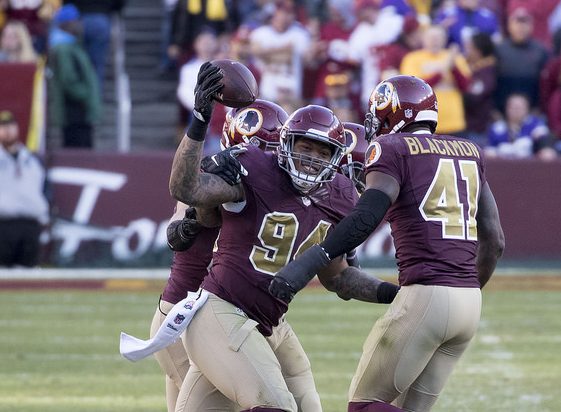 With the Cowboys in first place, The Redskins will play with the mentality that every game has to be won. This has to be the mentality for them to at least grab the Wild Card. Before Week 7, the Redskins were rolling. But they hit a little bump in the road to the playoffs.

Here are the recaps of the prevous 3 games.

WEEK 7: Going in to week 7, The Redskins had won 4 straight games and were on a roll. For this week’s game they traveled to Ford Field to face the Detroit Lions who were coming off a win against the LA Rams.

The Redskins offense couldn’t get anything going all day; Matt Jones didn’t help matters at all by fumbling twice, one of those in the red zone. The Washington defense really took the Lions offense out their game, but the offense just couldn’t score most of the game. In the last couple minutes, QB Kirk Cousins, led a go ahead touchdown drive that every Redskin fan thought would win the game. Detroit got the ball back and just scorched the Washington defense. The Lions scored the game winning touchdown, 20-17.

This loss hurts for Washington, as they dropped to 4-3 and back to the bottom of the division. The Redskins looked to bounce back Week 8 vs the Cincinnati Bengals in London.

WEEK 8: The Washington Redskins faced the high powered offense of the Cincinnati Bengals lead by QB Andy Dalton. This was expected to be a high scoring game and it did not disappoint as both teams offenses couldn’t be stopped by the opposing defenses.

Kirk Cousins threw for over 400 yards and played his best game of the season. On the opposite end the Redskins’ defense could not stop Bengals’ WR AJ Green, who had 9 catches, good for 121 yards. Redskins CB Josh Norman could not stop him. This game would eventually go to overtime and as both teams could not score. Washington finally got into field goal range for Kicker Dustin Hopkins, who has been one of the best kickers in the NFL this year. It was a 34 yard field goal but the pressure got to him and somehow he missed. For the second straight week the NFL had a game with a tie. This tie stings for the Redskins as they went into the bye week 4-3-1, 3rd place in the NFC East. In week 10 they are back home to face the physical Minnesota Vikings.

Week 10: Coming off a bye week, Washington wanted to start the 2nd half of the season with a bang. They were mostly healthy except for star WR DeSean Jackson who was out with a shoulder injury. They are facing a Minnesota team that has the best defense in the league and are coming off 3 straight losses. They desperately needed to get back on track.

The Redskins would strike first, scoring 2 opening quarter touchdowns to make the score 14-0. But then, things started breaking down, as Minnesota would go on to score 20 unanswered points to end the half and Washington didn’t seem to have an answer. The Redskins got the ball first in the second half and drove the ball down field but had to settle for a field goal. The Vikings did not score again as the Redskins defense showed toughness forcing Minnesota to punt every time they had the ball. The Redskins would proceed to put up 3 more field goals and they would go on to win this game 26-20.

This was a HUGE win as Washington stays in the thick of things in the NFC East with a record of 5-3-1.

Next week they stay at home to face the Green Bay Packers, the team who eliminated them from the playoffs last year.

Washington needs to win the remaining games to have any chance of winning the NFC East for a 2nd straight year, or at least make the playoffs as the Wild Card.