Wrestling Warriors Are Grappling with Season’s Ups and Downs 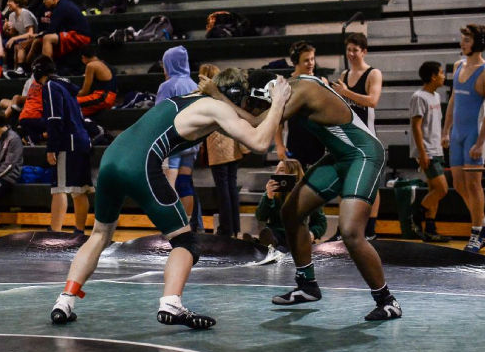 He steps onto the mat staring his opponent straight in the eye. His heart is beating faster and faster but he remembers the first thing his coach taught him, “don’t show any weakness.” After remembering this, the inner warrior comes out, and he crushes his opponent.

The first tournament of the season was on Saturday, December 3rd. Varsity went to King George High School before the sun was even up. Captain and sophomore Loranzo Rajaonarivelo, wrestling at 145lbs, had a dominant performance and went 3-0 with 2 technical falls and a pin. Captain and senior Andrew Mason had a dominant showing and went 5-0 overall. Captain and junior Eduardo Ortiz, at 160lbs, went 4-1. Captain and freshman Vincent Galang, wrestling at 152lbs, went 2-1 with a dominant show over Louisa County, Charlottesville High School, and had a close one point decision loss over Stonewall Jackson High School. As a team, they went 0-2 in the first round.

In the 2nd round, the team came out stronger. They left it all on the mat, but didn’t win the bronze bracket.

“This team has to keep their feet moving; they can’t get lazy with their stances they can’t get lazy on bottom. They have to be quick and reactive, because thinking takes too much time in this sport.  They gotta get on their scoring horse, and rack up points. Don’t think just do.” said Rajaonarivelo of the first tournament of the season.

The team then headed to the NoVa Classics the following weekend at Fairfax High School. The team wrestled against the toughest of the tough. Battlefield, McLean, Liberty, and Edison were there and ready to win. Jakub Glogowski placed 6th in the heavy weights, Loranzo Rajonarivelo placed 8th. In addition to Senior Andrew Mason, Freshman Vincent Galang, Freshman Steven Rochard, Sophomore Simon Enkbold all placing in the top 12.

Since it was a charity match, it does not count against their record. Both matches were tight in score, but sadly, Wakefield did not take the win that night.

Wakefield Wrestlers were supposed to have a meet this Saturday but due to icy road conditions Fairfax could not attend. The next event is going to be Wednesday (TODAY!) at Marshall at 2pm against George Mason and South Lakes…hopefully a great way to kick off their Winter Break!

They aren’t done yet though! Varsity will be having another tournament at Woodbridge High School during Winter Break December 27th and 28th.

The Warriors will kick off the New Year (on Wednesday, January 4th) with a meet at HOME against Edison, Thomas Jefferson, and Marshall. Support your wrestling team, WAKEFIELD! #WARRIORNATION