CAPPIES REVIEW: In the Garden of Live Flowers, a Stirring Fantasia 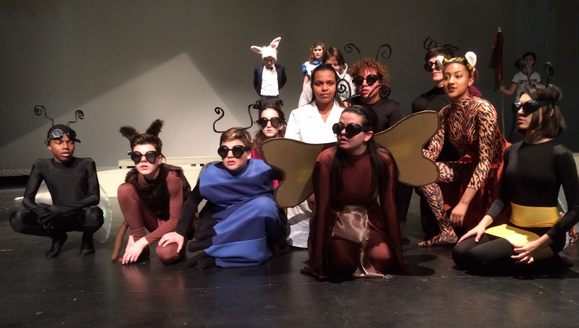 Lights up on a groggy Rachel Carson riding out the tremors of her last round of chemotherapy, tremors that ripple through the emerging chorus of insects and a familiar curious girl in a blue dress. Carson has fallen down the rabbit hole to a Wonderland of 1960’s hospital beds, sterile whites, and old memories aplenty, all in pursuit of finishing her last book before her time runs out.

So begins Wakefield High School’s In the Garden of Live Flowers, a stirring fantasia on the life of the pioneering marine biologist and conservationist, written by Lynne Conner and Attilio Favorini.

Junior Hazel Thurston leads this journey through a mind in collapse as Rachel Carson, from snapshots of her early childhood to her last days writing the revolutionary Silent Spring under the weight of late stage breast cancer. Thurston demonstrates an impressive range in playing Carson at so many stages of her life. Her sensitive portrayal highlights Carson’s feelings of alienation from the patriarchal world and the constant difficulties of being a woman far ahead of her time.

The chemistry shared between her and her lifelong friend Dorothy, played by Danah Alkhafaji, only increases this sense of isolation. Alkhafaji’s tenderness in the role and Thurston’s suppressed gratitude add a layer of historically accurate ambiguity to their relationship that distances Rachel Carson further from her world’s conventions.

Although In the Garden of Live Flowers deals in weighty issues (all handled with impeccable maturity from Wakefield’s cast), it isn’t without its moments of humor. Retta Laumann as Sis and Angus Long as her awkward Daddy shine in a scene carefully inverting a “Birds and the Bees” conversation to explain the biochemical warfare waged against gypsy moths. Laumann as publisher Marie Rodell and Garrett Rinker as the mile-a-minute talking salesman also add touches of light-heartedness to the play.

What truly distinguishes Wakefield High School’s performance is their animated, versatile, and lyrical ensemble. Each member is asked to play numerous roles as well as dance in three ethereal modern numbers led by the graceful Julianna Ditta and Aniyah Smith. Their efficient use of pantomime, replacing many props, heightens the dreamlike nature of the play.

Technically, In the Garden of Live Flowers, excels in impeccable stage management thanks to Jackson Hambridge. The lighting cues, especially those regarding the cyclorama during the Queen of Hearts’ (Gidget Shirley) entrances are timed perfectly. The tech crew harnesses Christmas music, period accurate radio themes, and spoken recordings of Carson’s letters, among other music, to articulate time and place with elegance. All members of the running crew and the board operators are additionally dressed in hospital scrubs as though the audience is joining Carson during her radiology treatments.

It’s the breathtaking finale of Wakefield’s show—a shower of pages, Thurston splashing madly in a real pool—that encapsulates this production’s triumphs. In the Garden of Live Flowers is a beautiful, if not at times painful, journey through a revolutionary mind, one only possible due to technical and creative prowess.