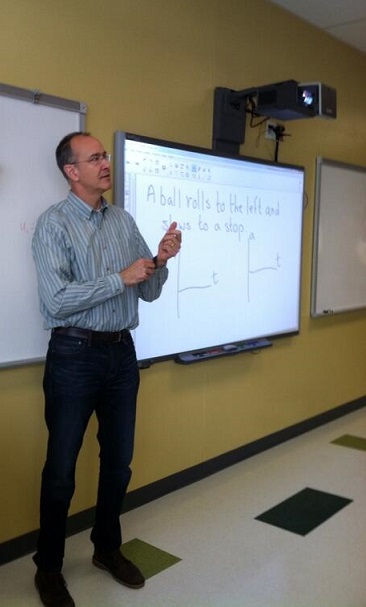 You see him when you walk past the B hallway on the 2nd floor. From competing in crossword puzzle competitions to keeping a plastic rat beside his desk, it is safe to say that there are many things about Dr. Megargee that distinguish him from the ordinary teacher.

While teaching at Wakefield for nine years, Megargee caught on to the fun of being an educator. This realization did not come instantly, it took some time. His earliest memory of working at Wakefield was filled with dislike; he thought he needed to “over discipline students.” This made the process of teaching much less exciting. When Megargee realized that the classroom did not have to be this way, he understood that teaching is supposed to be fun. This realization allowed him to regain his love of physics.

Dr. Megargee likes to keep his brain stimulated by doing crossword puzzles because “being old is dirt.” Crossword puzzles help keep his brain sharp since he sometimes forgets things. After reading about crossword puzzle competitions in the Washington Post, Megargee decided that he should put his skills to the test. He won 1st place in the Arlington Puzzle fest, blowing 50 people out of the water for the top prize. This year, he won a respectable 2nd place. His competitive streak is strong now as Megargee feels that he is “obligated to challenge and time himself.”

Not many teachers have cooking hot dogs included in their lesson plans. This man does. When asked why he does this, he responded with a smile, “do we need a reason?” In all seriousness though, he explained that hot dogs are great conductors of electricity because of the high quantities of salt they contain. This can make the experiment, “the most dangerous thing all year.” At the beginning of these lessons, Megargee jokingly tells his students, “if I look like I’m cooking [instead of the hot dog]…help me.”

So, what is his most unsuccessful science experiment here at Wakefield? “Aw man, that’s a long list” Megargee replied with a laugh. He went on to explain that there will always be labs where the students get more confused after the experiment instead of understanding the concept more, memories of egg drop projects gone wrong scramble to the surface as well. One particularly trying demonstration came when he was spinning a mass on a rope, and asked the students what would happen if it stopped. Then, everyone in the room got to experience the answer. The mass catapulted to the other side of the room. Of course, nobody got hurt.

Another interesting fact is that nobody influenced this science teacher to go into physics. If anything, he had “more teachers who influenced him to NOT pursue physics.” Despite all of the tedious teachers in his past, he stuck with physics because he’s always been good at it.

When asked to describe himself in one word he replied, “I did all my bragging before I came in”. The word he eventually settled on was, “tall”.

It is evident that Dr. Megargee is far from average. His easy going demeanor keeps students engaged; his wit is just gravy on the biscuit.