#2 Clemson Takes Out #1 Alabama For The Championship 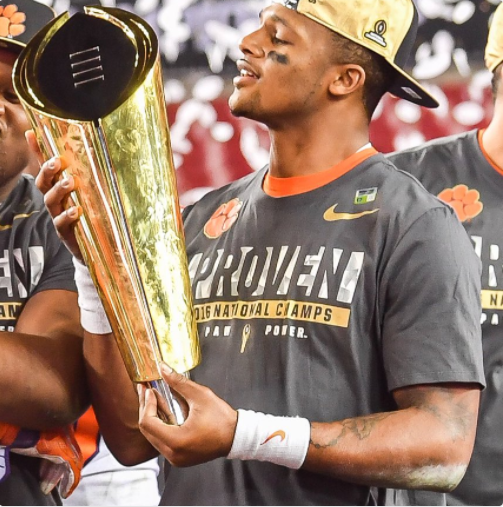 January 9th! Rematch! Clemson vs. Alabama! Championship game! Coach Nick Saben looking for another championship under his belt with this Alabama team, while Dabo Swinney looking for his first ring as a Clemson coach. This game is still being talked about a week later.

About halfway through the first quarter, Bo Scarbrough puts the Role Tide on the board first with a 25 yard touchdown to make the score 7 to 0. Five minutes into the second quarter, Scarbrough gets the handoff and runs through arm tackles to get a 37 yard touchdown. With the score 14 to 0, things were looking up for this Alabama team while their running back had 76 rushing yards with two touchdowns in the first half.

Late in the second quarter, the Tigers had the ball on their own 17 yard line and quarterback Deshaun Watson decided to throw a screen pass to Deon Kain who made a couple defenders miss and takes the rock from one side of the field to the other, picking up 43 yards for the Tigers. Did this provide a spark for Clemson? Later in the drive, the Tigers were on the eight yard line, Watson wanted to make something happen, he took the ball, followed his running back for a block and tip toed into the endzone making the score 14 to 7.

Now, everyone keeps talking about this play. Halfway through the third quarter, the Tigers have possession. Watson steps back in the pocket and finds his receiver Hunter Renfrow and he takes it to the house for a 24 yard touchdown while making three defenders miss. Score now, 17 to 14.

With 2:30 left in the third, Alabama faced a huge deficit. Scarbrough getting injured and not being able to play for the rest of the game. That must have gave the Tide some inspiration, the next play they dropped some trickery. Quarterback Jalen Hurts faked the screen pass to his wide receiver and found his tight end,  O.J. Howard sprinting down the sideline for a 68 yard touchdown. Alabama took the lead 24 to 14.

4th quarter, Clemson brought the ball down to the four yard line and had something up their sleeve. Watson hiked the ball and his receiver, Jordan Leggett stopped in front of his defender while Mike Williams looped under him for a wide open touchdown. He brought the score to 21 to 24. The Tigers got the ball back and Watson threw the ball up to Williams from the 43 yard line to the 30 yard line. Williams made an amazing catch to put his team in good field position.

The next play that everyone keeps talking about was when Watson did the same thing he did for his first touchdown. He kept it and ended up getting a 29 yard rush. It put them inside the one yard line. The following play, he handed it to his running back, Wayne Gallman who leapt over the line and scored for Clemson, giving them their first lead of the game.

The next slick play is when Jalen Hurts threw the screen pass, but the wide receiver launched the ball down field to Howard for a 24 yard gain. Next play, Hurts decides to take matters into his own hands and scrambles for a 30 yard touchdown and puts Alabama up 31 to 28.

Last drive of the game, last chance for Clemson to score. Watson dropped back and threw the ball deep to Williams who made another amazing catch to get the Tigers closer to the end zone. With 19 seconds left, Watson found Leggett down the sideline and made an amazing catch at the nine yard line.

With six seconds left, Watson drew up the same play as their last touchdown, but this time he found Renfrow in the endzone for the game winning touchdown, final score was 35 to 31.

The Clemson Tigers win the CFP Championship for the first time since 2005 and knocked off the great Nick Saben.

After the game, the Tigers said, “this season was all about love.”