President Trump’s Travel Ban: Safe for America? or Destroying The Very Fabric of Our Country? 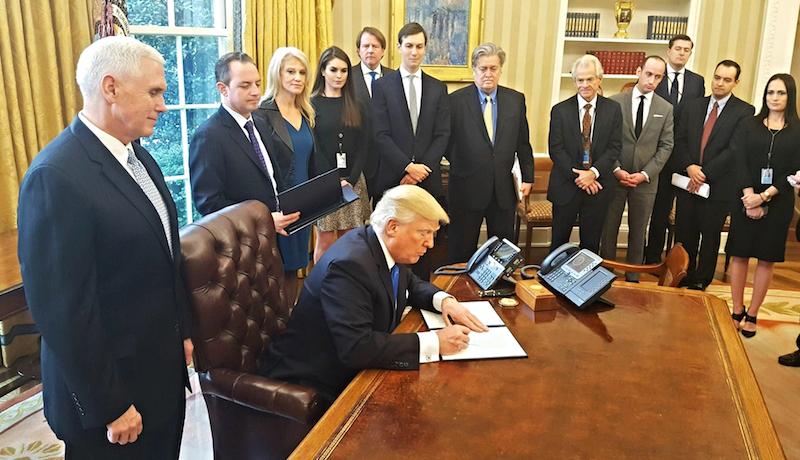 In President Trump’s first week in office he signed an executive order to keep refugees from entering the United States for 120 days and immigrants from seven predominantly Muslim nations out for 90 days. Then, maybe they can enter the country if they are vetted. If they are lucky.

According to CNN, “Team Trump apparently never ran the order by officials at the Justice Department. Homeland Security officials weren’t given much guidance about how the order would be implemented or enforced. Thus the confusion and chaos.”

Travelers on planes were trying to enter the country and were detained when the planes landed in Alexandria, VA, New York City, and Los Angeles.

The nation’s airports erupted with protests to the ban. This travel ban can be looked at as a Muslim ban in a number of different ways: It targets 7 different predominately Muslim countries which all citizens of these countries or people who have visited are not allowed to come in the US. These countries are Somalia, Libya, Sudan, Iran, Iraq, Syria, and Yemen. According to the Global Terrorism Index (an index that ranks countries by how dangerous they are) 5/7 of these countries are in the top 10 (with the exception of Sudan #16, Iran #39).

Many believe that a 120 day vetting period may not be the best thing for our country, but for American safety, it’s mandatory.

It’s essential to create a system that can potentially screen out and detain possible threats to our country.

On Tuesday, judges from the 9th circuit of the the U.S. Court of Appeals heard arguments from both side to make a decision whether or not to approve President Trump’s executive order. “We appreciate the importance and the time-sensitive nature of this matter and will endeavor to reach our decision as soon as possible,” said Judge Michelle Friedland at the conclusion of the arguments. If the 9th circuit doesn’t approve the executive order, the Trump administration could possibly take this case to the Supreme Court. With 8 seats on the Supreme Court, the decision could be split down the middle.

It seems that the country is 50% for the ban, and 50% against it. That is what is going to make the next four years tempestuous. No one side is a majority, so both sides clash.