A Fencing Competition! In the Library?!? 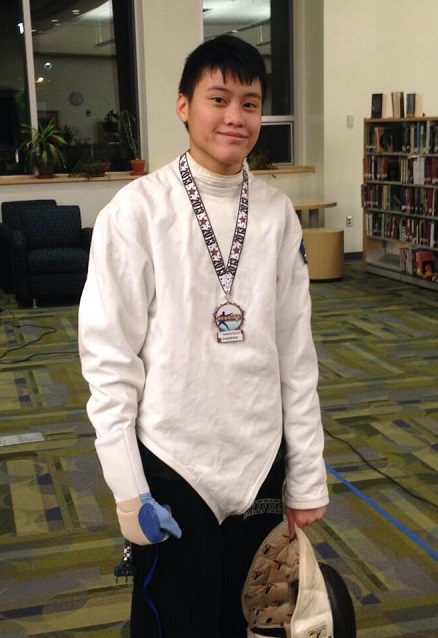 Evie Priestman ’17 wins in the Gold Medal Round. Congratulations, Evie!

All is quiet in the library. A beam of sunlight makes its way through the window and glints on something metal. Swoosh. A hand extends up to the face and a sword comes in to focus. A sword? Yes. In the library? Yes. A fencing tournament dubbed, “Stabbed in the Stacks” was held in Wakefield’s library on the second Friday in December. The following students participated in the tournament: Max Rosenberg ‘17, Armand Mabrey ‘17, Evie Priestman ’17, William Ramirez ‘16, Brandon Mack ‘16, and Sean Kinney ‘15 . The matches were spectacularly intense, more so because they were held in the library. The enthusiasm of the players is what made the tournament so great, “fencing is like an adrenaline rush; you should try it out!” stated William Ramirez ’16. Spectators had fun watching every match to see who would advance to the semifinals and finals. The beginning duels were spectacular! In the finals, duels started to get heated. The final round was called the Gold Medal Round. The two finalist who made it from the Wakefield team were Evie Priestman ’17 and Max Rosenberg ’17 (a Washington Lee student who is on Wakefield’s fencing team). The rules change in the final round; this time, to get a point, you have to hit your opponent even more than before. These great duelists gave it their all in the Gold Medal Round. They charged back and forth, taking their points where they could. In the end, Evie Priestman ’17 was the victor! The crowd applauded Evie’s win. All in all, it was a satisfying match for any sports lover; each member showed good sportsmanship by congratulating each other, no matter what the outcome. An old saying came to mind as Evie held up the fencing sword after the final battle; believe, practice, and you can accomplish anything.