Will POTUS Be Removed From Office? 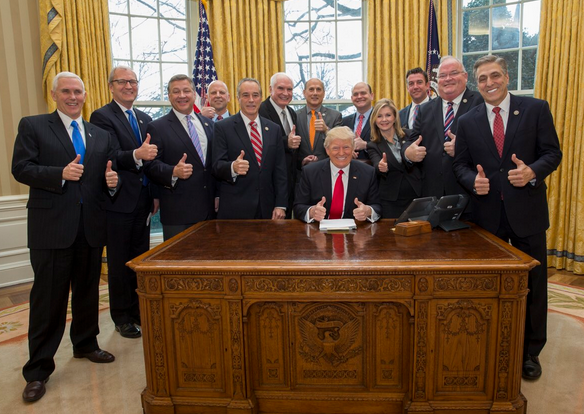 President Trump has been in office for a month and the country has been split down the middle with his decisions, so in other words…total chaos and havoc. Anti-Trump marches have swept through the country.  Some of the nation has signed a petition to impeach the new POTUS. Supporters of the “Impeach Trump Now” campaign are gaining more attention by the day. Will their voice matter?

The campaign was created by two Harvard Law professors Tamara Piety and Lawrence Lessig. They started this campaign after President Trump failed to cut his ties with his businesses after his inauguration.  More than 850,000 people want our new POTUS to be removed from office. Even though the Harvard law professors weren’t the first to create this type of Anti-Trump petition, theirs has quickly gained huge support. The petition has gained support from believers and non-believers in Trump’s promise to “Make America Great Again.” The “Impeach Trump Now” petition has 1 million signatures. How many more signatures will it take before congress takes action?

It doesn’t stop here, though. Many gamblers around the world have bet money on President Trump’s removal from the White House. Betting on Trump’s possible impeachment began shortly after his November election victory. Back in April 2016, scholars, pundits, and even members of Congress began speculating that his iron fist attitude may lead to possible impeachable offenses that will remove him from office sooner rather than later. According to the different online betting sites the odds of Trump failing to complete his first term are 7 to 4. The odds of Trump getting impeached in the first six months of his presidency is at 4 to 1.