Why Can’t We Keep our School Clean? 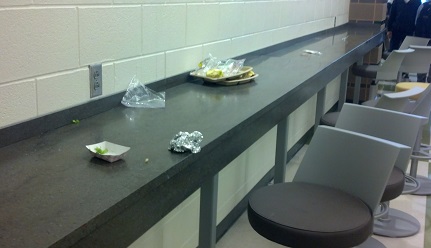 When the bell rings, items are discarded for the custodial staff to pick up. Clean up after yourself.

Wakefield has sometimes been criticized as the worst high school in Arlington County. After four years here, I really can’t understand why. Maybe it is because our old school began to fall in disrepair. Maybe it is because it has been a while since we have had a solid football, basketball, lacrosse, field hockey, or (really) any other team. Even with a new school and improved athletics, it seems like the bad aura persists; it may be because students don’t pick up after themselves.

Yes. I am talking to all of the litterbugs at this school. Litter bug seems like too nice a word for the people who are already trashing this brand new school. After lunch everywhere the eye can see there is trash, around town hall, the courtyard, even on the stairs…Everywhere but the trash cans and recycling bins. The custodial staff is not here to pick up after lazy students; they’re here to keep the school clean overall. No one has the right to make their jobs harder by not picking up their lunch tray.

Many times, students that do throw their food away disregard the sign that says “Paper only” or “Recycling” and just throw their trash wherever there is a can. This is an issue as well. With this huge new school to keep clean, our phenomenal custodians shouldn’t have to garbage pick through the recycling and throw any non-recyclables away in a separate can. If there’s trash in the recycling bin, it ALL goes in the trash. Christopher Robertson ’16 stated, “seeing trash everywhere is…disrespectful because there are trash cans around, students leave more for the [custodians] to do while making our school look lousy.”

For those of you who don’t litter, and clean up after yourselves, thank you! It makes our school look better; this is our opportunity to make this school one of which we can all be proud. If you see people leave trash lying around town hall, the courtyard, or anywhere in the school, tell them that they aren’t appreciating the new school! They should keep the new school clean for future students. Members of the custodial staff aren’t your personal maids; they’re people who graciously clean the school. Everyone needs to remember that.

Don’t get me wrong. I’ve spent four years at Wakefield and I love the school, it’s just, we don’t have as much school spirit as we think we do. School spirit isn’t just attending sporting events and cheering on your teams, it’s also taking care of your school and having respect for it. We seem to forget that part; it’s not just about being a super fan for the sports teams, but also about being a super fan for the school itself. The next time you don’t feel like cleaning up after yourself; take the second to do it.

You will help the school be a better place and not a trashy place.