Round of 16 Goals Galore! 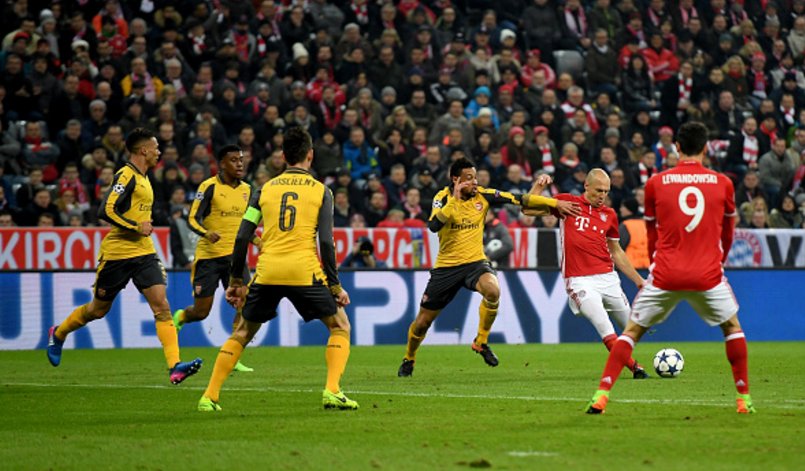 The Champions League is full of up and downs each year. Upsets and games filled with goals. Who will take it all in the end? Will your team prevail?

Everyone knew this was going to be an exciting match but what a deficit it was. With Barca and PSG being second in their leagues we were expecting a close match but it was the exact opposite. PSG start the game out strong in the 11th minute with a shot on target but Ter Stegen makes a magnificent save to keep the ball out of the net. In the 18th minute PSG earn a free kick right outside the box. Di Maria steps up for it and converts it with a beautiful curling shot into the top right. Draxler also strikes in the 39th making it 2-0 at the half.

Just 10 minutes after halftime di maria finds space outside the box and perfectly curls it into the top left corner past Ter Stegen, what a goal and what a game for Di Maria it is. The last and final goal falls in the 71st minute. Barcelona are caught on the break and Edison Cavani is through on goal. He keeps it low and finishes it calmly in the bottom right corner. The final whistle blows and the score is 4-0 for PSG, nobody expected such an upset. Surely they can’t come back from this in the second leg! MOTM is Di Maria.

Most people would expect Dortmund to win this game due to players such as Aubameyang and Marco Reus, but Benfica are a very underrated team. They are respectively 1st place in Primeira Liga (Portuguese League) and have a lot of young talent and experienced goal scorers in their squad. Dortmund dominate most of the first half but have no success in finding the back of the net. Dembele and Aubameyang are dangerous upfront proving to be a surprisingly great duo but they can’t finish their chances.

After doing almost nothing in the first 45 minutes, a few minutes after halftime in the 49th sevilla put one in through a corner. Pizzi whips it into the box and Mitroglou controls it and puts it in from 2 yards out. Penalty! In the Fejsa commits a handball in the box and the referee points to the spot. Aubameyang steps up for it but misses, striking the ball straight at the keeper. What a disappointing game for Dortmund this is. They get a couple more chances with a great shot in the 85th but still no goals to show for it. That’s the final whistle and Benfica walk away with a 1 goal undeserved leed. MOTM is Mitroglou.

What a great matchup we have today, to incredibly talented sides. Juventus have proven themselves in the champions league getting to the final and the semi finals consecutively. Juventus start out strong with Khedira and Higuain proving to be key players in the first minutes. Red card! Telles gets a second yellow just minutes after his first. He stupidly flies into a tackle this time on Liechtensteiner and the ref sends him off. Higuain and Dybala have a couple of great strikes in the last couple minutes of the half with Higuain’s saved and Dybalas effort coming off the post. Juventus should have at least scored 1 by now.

Juventus prove to be the dominant side in the second half with many chances and two goals 1 by Pjaca and 1 by Dani Alves. Dybalas stray path falls into the path of Pjaca and the croatian makes no hesitation and converts it for their crucial away goal. Just 2 minutes after Juventus strike again!!! After just getting on a minute ago Dani Alves chests the ball down after a cross from Sandro and flicks it into the side netting with an acrobatic goal. What a game for Juventus bagging 2 crucial away goals!!! MOTM is Dani Alves.

Leicester as surprise winners of the BPL last year and Sevilla consistently doing well in the BBVA we know this game will be exciting, neither team have ever had the chance to play in the champions league final. The game starts out in Sevilla’s favor when they win a penalty. Joaquin Correa steps up for it but misses and sends a weak penalty straight at Schmeichel. Sevilla finally strike in the 25th minute through a great accurate cross which is met by the head Pablo Sarabia who converts it for the 1-0 lead. Sevilla gets another couple good chances in the first half but Schmeichel does well to keep the score 1-0.

In the 50th minute a little bit of hope comes when they get their first shot on target, but the attempt goes straight to Sergio Rico. In the same minute a goal almost falls for sevilla when Vitolo has a nice shot but sadly hits the post. Not long after Sevilla get their long awaited 2nd goal through Correa with an assist from Jovetic. It’s been looking like a tough night for Leicester. Vardy!!! Leicester get a crucial away goal through nobody other than Vardy. Danny Drinkwater crosses it in and he converts it very easily. No more goals in the game but Sevilla hit the woodwork again in the last 2 minutes, this is the third time this game!!! The game ends 2-1 for Sevilla but Leicester grabbed a very important away goal that could help them in the next game. The MOTM is Sarabia.

I think we deserve a pat on the back. In the prediction article we wrote we predicted this score line. The game was dominance in it’s truest form. Bayern had 74% possession and had 500 MORE PASSES THAN ARSENAL. (#WengerOut). The game started out with an Arjen Robben Classic, cuts back on his left foot, dribbles in, then tucks it in top corner. Then Arsenal gets one back. Robert Lewandowski “fouled” Laurent Koscielny and they received a penalty. Manuel Neuer blocks it and Sanchez gets it back and scores.

Arsenal were stronger than expected in the first half, but in the second they were nowhere to be found. Robert Lewandowski heads the ball in from a Philipp Lahm cross to make it 2-1. 3 minutes later Thiago scores from a wonderful flick pass from Lewandowski. Thiago then scored a beauty of a volley to make it 4-1. Muller gets substituted on and almost immediately receives the ball in the penalty box, fake shots and send 2 defenders away, and scores. My MOTM is Thiago.

This game was just a bunch of beauties. First Insigne scores a 40 yard beauty. He had amazing awareness to sense Navas was way out of position, and curled it around him. The goal that equalized for Real was equally as beautiful. Carvajal gets the ball at the edge of the box and crosses the ball with a beautiful trivela and Benzema heads it in. The second goal was magnificent. Ronaldo gets the ball near the goal and passes it to Toni Kroos who just taps the ball into the net. Madrid’s 3rd however was a banger. There is a deflection in the box and Casemiro sees the opportunity for a volley and goes for it. He slams it into the side netting. ¡Que Golazo! MOTM Casemiro.

The game starts out with a golazo, Saul gets the ball on the side of the box, cuts left, curves it top corner. The second goal for Atletico was a counter attack. A Leverkusen defender miss hits the ball, Gameiro takes it and it becomes a 1 on 2 situation. Griezmann comes in gets the ball and launches it into the goal. Leverkusen gets one back by a cross in to Bellarabi who sweetly shoots it in the bottom corner. The third for Atletico was a wrong call by the ref for a penalty, but Gameiro steps up and scores it. Leverkusen’s second was an own goal by Stefan Savic. The last goal for Atletico was a a wonderful cross into Fernando Torres, who scores a wonderful header. MOTM is Griezmann!

Probably the most eventful game with 8 combined goals. Bayern starts it off with sterling in the 26th minute with a great combination goal between him and David Silva. Monaco get the equalizer not long after with a great diving header in the 32nd. Wow! Monaco get another just 5 minutes before the half through Mbappe. A through ball led by a powerful shot! Goalie has no chance. Penalty! Just after halftime Monaco are awarded a penalty.

The man of the hour, Falcao, steps up to take it but he is denied by Caballero. Aguero makes it 2-2 in the 59th with a weak shot that probably should’ve been saved, unlucky for Monaco. Just as you thought anything can happen Falcao chips the keeper for the 3-2 what a goal to put them in front. Manchester continue to pressure and Monaco crumble. 3 more goals are put past the Monaco defense by Aguero, Stones and Sane, Manchester with the comeback and what a goal show it was. Unlucky Monaco couldn’t win the game but that’s the beauty of soccer it’s so unpredictable. MOTM is Falcao.

Make sure to follow up on all Champions League news on the Chieftain and support your teams in the second leg matches on March 7th, 8th, 14th and 15th!

Who will take the title?!?