Noel Signs To the University of Charleston 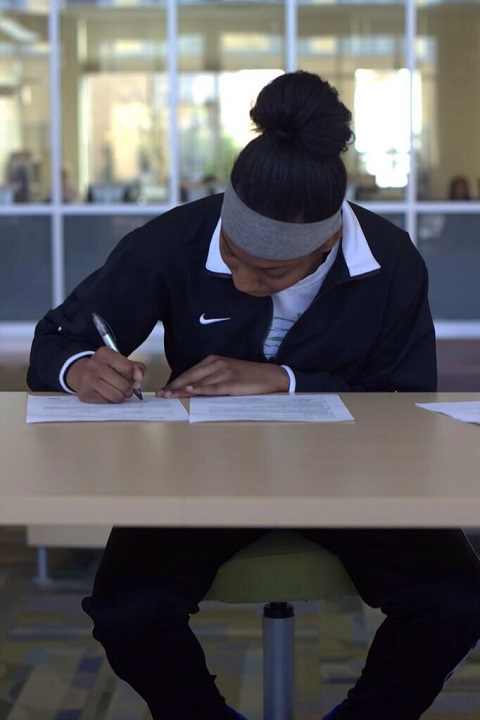 Michelle Noel signs her letter of intent in the Town Hall.

Michelle Noel, the star power forward on the girls’ basketball team, officially signed her letter of intent to the University of Charleston last month. Michelle will play Division II basketball next year in West Virginia.

This season, Michelle Noel is leading the Warriors in scoring, averaging 13.1 points per game. Michelle is shooting 70% from the free throw line and has made 33 field goals.

When asked about how it felt to be signed to a college team, Michelle replied, “I am extremely excited, yet very nervous to be playing collegiate basketball. I am ready to grow as a player and a teammate. I am ready to learn.”

Michelle played AAU for two years on the Premier Sports Performance Academy Rams, and that’s where she garnered up all her collegiate looks. Michelle had 20 Division I and Division II schools looking at her over the course of a year and a half.

There were two schools that she was torn between. She picked the University of Charleston over UMass Amherst because she really connected with Charleston’s coach, “we had a 40 minute phone conversation and that’s when we made the arrangements for me to visit them.” After that visit, the decision was made.

Michelle plans to learn as much as possible from the coaches and her teammates. She also plans to stay the full four years at the University of Charleston, amid rumors of only staying for two years and transferring to a Division I school.

For now though, Michelle is focused on turning her Wakefield team’s season around. The Warriors are 1-6, despite Michelle’s strong scoring efforts.