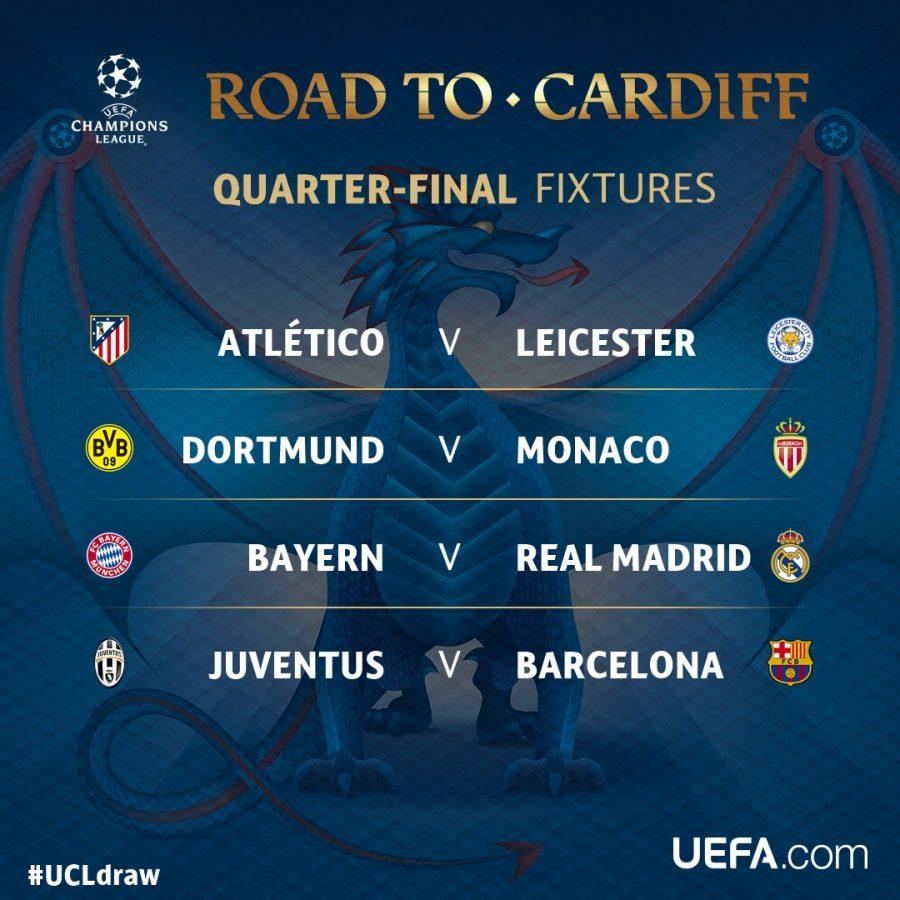 The draw for the Champions League Quarter Finals!

These Quarter Final draws could be some of the best we have seen in a long time. 1 English team, 2 German Teams, 2 Spanish teams and 1 Italian team remain in the top 8. We know there will be great goals and upsets! These are my predictions for the remaining matches!

Leicester being one of the big surprises in world football through the last 2 years against a 2016 Champions League finalist this will be one of the most exciting matches of the 4. Atletico’s defense is known as one of the best with leaders such as Godin and Juanfran, they are almost impossible to breakdown! They also have a great attacking prowess with Griezmann and Carrasco. Atletico are the clear favorites in this tie but we never know what Vardy and Co. can pull out of the bag! My prediction for the matchup is 2-0 for Atletico Madrid.

Probably the two teams that are not expected to make it all the way…I think this could go either way. Dortmund might be the overall better side with a clinical strike force of Aubameyang and Dembele but Monaco have proven themselves this season being first place in Ligue 1 and scoring an insane average amount of goals per game. Monaco has insane young talent and are a threat to any team but Dortmund are definitely more experienced in the Champions League. My prediction is 1-0 Dortmund.

The match I am personally most excited for is the matchup between what could be considered 2 of the best teams in the world. Bayern lead the Bundesliga in a dominant fashion being 13 points clear of the 2nd place team RB Leipzig. Real Madrid are currently top in Liga Santander (Spanish League) 2 points ahead of a close FC Barcelona. Both of these teams are soccer giants and have goal scoring machines like Robben, Bale, Ronaldo, and Lewandowski who have bagged more goals this season than you can imagine. This will be a tight game but I feel that Bayern can break them down due to Reals lacking defense this season. My prediction is 1-0 Bayern.

This game is exactly like the 2015 Champions League Final. Juventus will want their revenge for what happened 2 years ago and are coming back very strong easily beating Porto in the Round of 16. Barcelona shouldn’t even be here but came back from a 4-0 deficit to beat PSG 6-1 in a record breaking defeat. They surely have a fire in their hearts and will want to beat Juventus at any cost. Barcelona could still be the best attacking force in world football with Messi, Suarez and Neymar leading the deadly trident. Juventus have a surprisingly well rounded team and an even better defense but I think Barcelona will win this one 2-0.

Be sure to tune in to all of these matches on April 11th, 12th and 18th. Remember to check out all our previous Champions League articles on whschief.com and check out 433 for all live commentary.