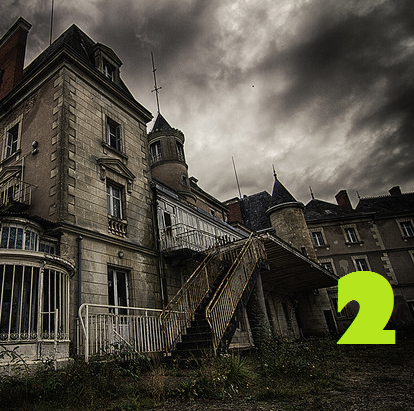 “OMG! Sab! Why are you home already? Why didn’t you call me?” I put down the knife in my hand. I had so many questions to ask her. When she saw me, I could sense a relief from her eyes but also tears welled up in her eyes.

“Tania, you are finally home, I’m so scared, you have to help me!” With the confusion in my eyes, she spoke again, ” The story is true, I think because what I said weeks ago might have upset the spirit of the old lady.” Her hands were cold as I held her hand, led her to the sofa. “I’m going to make dinner, give me 30 min, then we can talk about it as we eat, okay?” Trying to keep my tone comforting, I left the living room without letting Sabrina respond and started to prepare for dinner.

While eating dinner, I found that Sabrina was not eating much as she used to, we weren’t talking, not even a second of eye contact was made, the atmosphere on the dining table was frozen. The situation went like this for 20 mins, finally, I decided to ask: ” Why aren’t you eating?”  “I’m not that hungry.”

“I’m not that hungry.” She said without raising her head.

“Okay. So, what did you mean by upsetting the old lady’s spirit earlier?” I asked.

Sabrina put down her spoon and looked at me for the first time through the dinner, her eyes were full of fear. She took a breath, let the thing that scared her to roll out.

” Remember I said I wasn’t afraid of the story that the owner of the cafe? Well, I lied. It’s scaring me so much I can’t even have a good night sleep.” tears streaming down her face, as she kept on telling me what happened. “This morning I was in the restroom of our school when I was done using it, I unlocked the door and pushed, this is where it freaked me out a little,” Sabrina lowered her head, as soon as she raised her head, she had a weird expression on her face. “I can’t open the door…”

” Maybe you didn’t unlock the door, but you thought you did, or…” I said, trying to calm her down. Before I could say another word, she interrupted me.

” That was impossible, I’m pretty sure it said “unlocked” when I pushed the door,” Sabrina said.

This is weird, I can’t think of any other reasons to this case, but looking at Sabrina who is now wiping out her tears, she is shivering. I have to calm her down. “Sab, if you don’t want to eat, do you want to take a shower and have a rest?” “Yeah, I’ll do that.” She pushed her bowl away and went to the second floor.

I finished my dinner and started to clean up. As I was cleaning, I thought to myself: Was the story true? IF the story is true, are we cursed?  I went to the second floor, there were no sounds of water in the bathroom, I decided to take a shower. The cold water that splashed on my skin made my thoughts more clear, I was about to think more about the incident that happened to Sabrina.

“Bang!” The door swung open suddenly, I pulled the bathrobe in front of me. As I had a peek through the door where I was taking a shower, I did not see what I thought had happened… the door was closed. I looked around, no one was there. Walking out the shower towards the door, there was no sign of forced entry. Opening the door, there was no one out there, I closed the door and kept on finishing the shower. ” What just happened?” I asked myself.

As I finished taking a shower, I walked into Sabrina’s bedroom. She was lying on the bed, curled up. “Sab? Are you still awake?”

I walked to her bed, Sabrina was looking outside of the window hiding her eyes from mine.

Sabrina flipped the blanket for me to get on the bed. I slipped in the blanket and hugged her, only God knows how much I want her to calm down. Both of us sank into the bed, I waited until I heard Sabrina fell asleep.