The Wakefield Chieftain • May 17, 2017 • https://whschief.com/15125/sports/washington-nationals-off-to-an-unforgettable-start/

Washington Nationals: Off To An Unforgettable Start 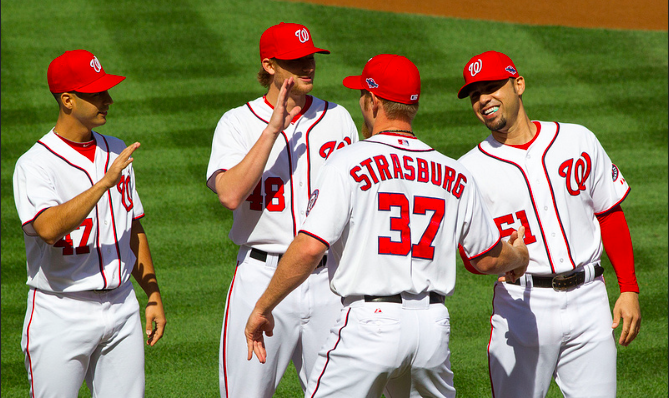 Before the game starting pitcher Stephen Strasburg goes for a high-five from his teammates.

The Washington Nationals are one of the best teams in the MLB as of now. They are off to a great start to the season and have many positives about the team. In the first few weeks of the season, some have been a surprise.

The Nationals have begun the season with a 25-13 record and are first in the national league East and have the best record in baseball. If the Nationals continue to play how they have in the beginning of the season, they could definitely have a chance of going far.

Some of the surprises that have come from the Nats performances are players having rebound seasons much better than expected, and players doing well that weren’t expected to do much at all. Most of the players that performed well last year, continue to perform well, but one main focus is Bryce Harper’s rebound from last years slump.

The Nationals have come out a lot stronger this year than last, getting the Nats fans excited about how they’re going to perform this season.

One player who is off to an exceptional season is starting pitcher Gio Gonzalez. He is off to a terrific season and this is a very big surprise because of the struggle he went through last year. When the season started, there was not much pressure on Gonzalez to carry the rotation, behind guys like Max Scherzer and Stephen Strasburg, all he needed to do was pitch above average, so far he has completely exceeded this expectation and is one of the league leaders in ERA.

Another player who has begun the season strong is first basemen Ryan Zimmerman. He has started off the season hitting 13 homers and being tied for most home runs in the league and a batting average of .385. If Zimmerman continues to perform the way he has started the season, there is no doubt he could be looking at an MVP season and may even compete for the Triple Crown, which is an award that has only been received 17 times in history, and most recently in 2012 by Miguel Cabrera, where a player leads the league in batting average, homers, and runs batted in.

The Nationals have begun the season strong and will continue to play well, but the real story behind these wins and the first place position is the team’s durable offense. The Nat’s starting pitchers have been very consistent this season with a couple small exceptions. The team’s lineup is unstoppable with everyone being able to get hits.

With the 2015 MVP Bryce Harper, the 2016 MVP runner-up Daniel Murphy, and the 2016 rookie of the year runner-up Trea Turner, on the National’s roster, and with other players on the team playing well, it is no surprise at all that the team is performing phenomenally.

The National’s have no permanent holes in their offense as of now. Other than Michael Taylor playing in the spot of injured Adam Eaton, the offense is prepared for the 2017 season.