Rebel Without a Cause Is a Hit 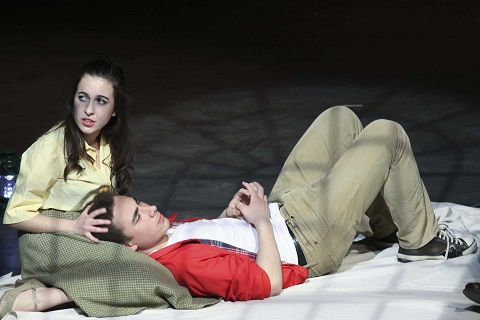 Judy and Jim in the shadows before the big confrontation.

Anyone who has ever been to a Wakefield theatre performance knows that they never fail to amaze; Rebel Without a Cause, was no exception. Performed by our Wakefield players the focus is on a 17 year old boy, Jim Stark, who moves to a new town to try to shake off his troubled past, but instead winds up befriending equally troubled teens, John “Plato” Crawford and Judy Brown. Jim is faced with defending his honor while also diffusing a rough home situation. The play’s protagonist, Jim, was played by Will Westray IV, senior. The two other leads include Judy and Plato, played by Lena Mobin and Nicholas Cadby-Spicers, respectfully. The chemistry between their characters and their ability to channel the internal, as well as the external problems faced by the characters was evident in their performance. The actors showed a deep understanding of their characters motives and fully immersed themselves into the personalities they had to portray.

Max Carruth also had a strong performance as he portrayed the leader of the local gang, Buzz. Carruth, along with the gang ensemble, successfully depicted 1950’s gang atmosphere. Thier ability to stand as a tough and rough gang but also have their individual personalities shine was enjoyable to watch. The outstanding performance by the ensemble essentially made the show what it was. Jake Bucks, Arsema Solmon, Usman Ishaq, Melanie Ewell, Rafael López Ramiro Pena, Alex Maccallum, Sean Balick, Alex Molina, Sofia Navas-Sherry, Chloe Lard and Leonard Claure also did an exceptional job taking on adult roles which required extensive make-up provided by the remarkable backstage crew. Mr. and Ms. Stark (Leonard Claure and Sofia Navas Sharry) truly internalized and portrayed the all too popular power-struggle between spouses. Sofia’s “sassy mom” persona attracted some laughs when not expected, but worked well with the push-over personality in her stage-husband Mr. Stark. Jake Bucks (Mr. Brown) also exemplified the distant-father figure many teens face today with his interactions with his daughter Judy.

Such a show could not be done without the incredible work of the stage crew led by Emily Hambridge and Isabel George. Together, they and Lucia Navas-Sharry, Jackson Hambridge, Ally Sobola, Evan Voldal, Jack Dobbins, Tommy Danaher and Manaal Qadri worked to create the atmosphere which made the show such an enticing success. Being the first show in the new theater the stage crew used every bit of it they could. Filtered lights cast windowlike shadows and the brand new spotlight made the action scenes just that more intense (and utterly blinding.) Spot on sounds and transitions along with simple movable props really put the show in it’s element. The use of the second floor made really captured the audiences attention toward the end, adding suspense and drama to the final moments of the show. Lastly were the time period appropriate costumes, leather jackets, flowy skirts and cardigans played up the 50’s vibe quite well.

All four nights the theater was near-packed, with supportive family members, friends and teachers. Although the audience couldn’t get a grasps on which parts were to be laughed at and which parts where serious arguments, not just silly sass, each and every member sat in anticipation for what would happen next. Each night was better than the last, the fourth performance having the most fluid acting and line precision leaving the audience in awe. The second night was the Cappies performance. Cappies are teenage judges from schools all around the district who watch shows in high schools and rate them in different categories, we will not know our results until much later but the reviews were all positive which paints a promising light for the future of wakefield theater! (Cappies reviews can be found at http://www.cappies.com/nca/Schools.aspx) Rebel Without a Cause also recieved the following Critic’s Choice for: Costumes (Lucia Navas Sharry and Sidney Shahariari), Sound (Jack Dobbins), Lighting (Jack Dobbins and Emily Hambridge), Sets (Jake Bucks, Emily Hambridge, Jonathan Soto, Raymond Palmer-Rainey), Makeup (Sidney Shahriari), Props (Jackson Hambridge, Ally Sobola), Stage Crew (Emily Hambridge, Isabel George), Ensemble in a play (The Creeps), Featured Actress (Caroline Frias), Featured Actor (Sean Balick), Supporting Actor in a Play (Nicholas Cadby-Spicer), Lead Actress in a play (Lena Mobin), Lead actor in a play (William Westray IV), and overall “Play”. These names along with others will be cast in a ballot shortly and could possibly receive nomination to go on further into the competition. 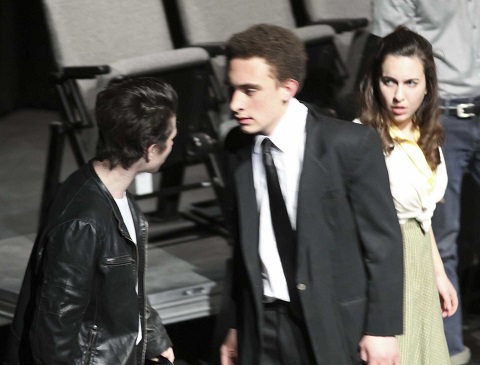 Buzz and Jim start arguing right from the beginning.

Mr. Gillespie and Joe Spencer with the help of Denny d’Alelio (Duh-Luh-Leo), Jorge Abreu, Carol Cadby and Andrea Blackwelder truly did an exceptional job directing and assisting this show. Nothing but positive remarks have been made about each and every adult who made this show possible.

If you missed Rebel Without a Cause make sure you make it to the next performance Spamalot, which is based on the hilarious movie Monty Python and The Holy Grail, on May 2nd, 3rd, 9th and 10th.