Back to Back! Nationals Head to Playoff Season 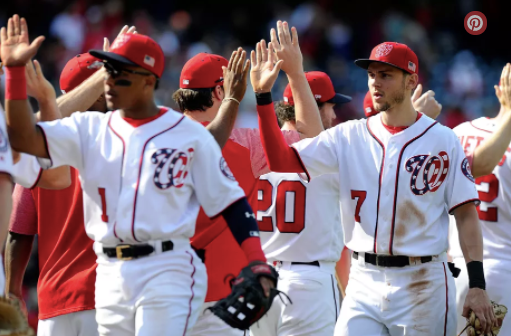 High fives all around after the big win.

For the second year in a row, and the fourth time in six years, the Washington Nationals are NL East champions.

Led by a scoreless 8 inning, 10 strikeout Stephen Strasburg gem, the Nationals defeated the Philadelphia Phillies 3-2 on Sunday, September 10th bringing the magic number down to one. (One game away from clinching the playoffs.)

Following the victory, the Nationals waited in the clubhouse watching the Miami Marlins play in Atlanta against the Braves. Moments after a Braves’ walk-off victory, the magic number had made it to zero, and the Nationals had clinched the Division Championship.

The Nationals ability to win a Division Championship for the second year in a row should not be taken lightly.  The Nationals have faced a long regular season including significant injuries to Trea Turner, Jason Werth, Michael A. Taylor, Brian Goodwin, and Bryce Harper.  Bench players Adam Lind and Wilmer Difo, along with trade acquisitions Sean Doolittle and Howie Kendrick, have been key to the Nat’s domination of the NL East. The success seen this season is a testament to manager Dusty Baker’s ability to rotate the lineup, keeping players fresh and ready to preform.

As they head into the postseason, the Nationals are still carrying the memory of having never won a playoff series. Here are a couple things to look out for:

Last year the Nationals saw a Clayton Kershaw relief effort put them to sleep in Game 5. The image of Dodger players storming the field at Nationals Park after winning the series is still fresh in players heads. This year has seen the Dodgers stand atop all of major league baseball, with a legitimate shot at one point to have the best record in baseball history. Despite recent struggles, the Dodgers are still deadly World Series contenders and the Nationals potentially could meet them again this October. Pitching duels involving Max Scherzer, Stephen Strasburg, Clayton Kershaw, and Rich Hill would make this prime postseason baseball. The question stands; if the two teams meet would the Nationals be able to capitalize?

Will Bryce Harper Make an Appearance?

It’s been a month since Bryce Harper slipped running into first base, suffering a bone bruise and calf strain in his left leg. After a month that saw no activity from Harper, he reportedly began running and throwing for the first time last Thursday. With a little over two weeks until the Postseason, Harper’s status is still up in the air. Running a strong NL MVP campaign before his injury, it’s no doubt that the National’s World Series hopes largely hinge on his return. Will Bryce Harper return, and if he does will he be at midseason form?

Will the Nationals Make the Most of the Moment?

The DC area has been fortunate to see the Nationals become one of Major League Baseball’s premier teams over the past few years, but there is now a legitimate sense of urgency. Bryce Harper and Daniel Murphy become free agents after next season, Jason Werth and Ryan Zimmerman are getting older, and Dusty Baker still has not extended his contract into next year. What was one of the best offenses in baseball this season could look drastically different within a couple years. The talent is there, but the clock is ticking. If the Nationals don’t make a prominent run this Postseason, there’s a chance we might not see them do it for a long time.

After a historic regular season, the 2017 MLB Postseason has great potential. The Postseason kicks off October 3rd with the AL Wildcard and the Nationals are scheduled to begin play in the NLDS October 6th.

Tune in this October to cheer on the Nationals in their second straight pennant run!