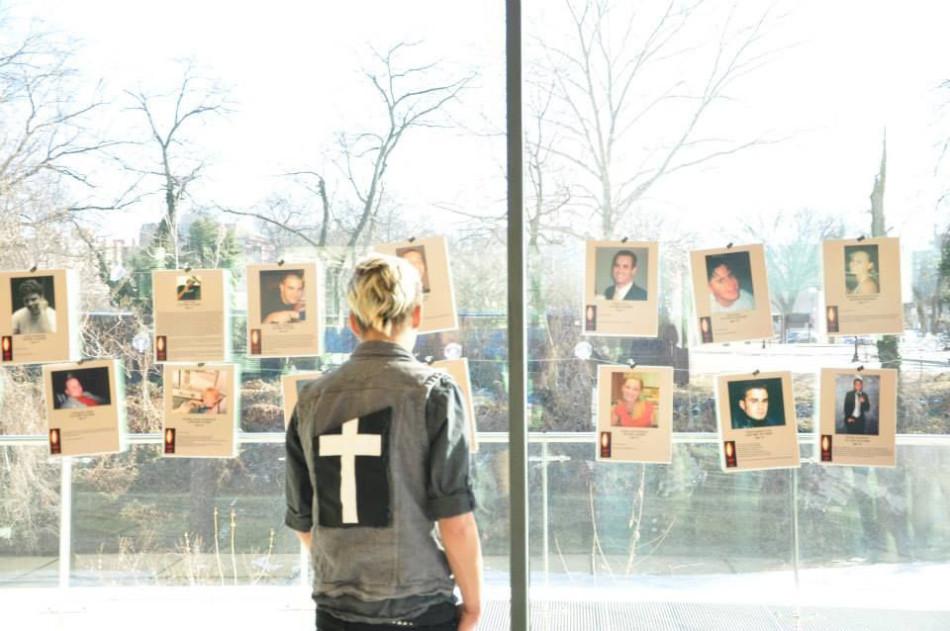 Christian Ward '16 looks at the faces of people who have lost their lives to drug abuse.

On Thursday, January 30th Wakefield students attended an interactive seminar at the Swedish Embassy in Washington DC. The seminar was on drug abuse and how it can really destroy someone’s life. Luci Grause, a Health & P.E. teacher, as well as the Head Field Hockey Coach at Wakefield, was the trip organizer. She explained the point of the outing, “high school kids have a lot to deal with, I mean, everyone does. This field trip was to show them that there are positive ways of coping, rather than drugs. Everyone could relate; it was so mesmerizing.” She went on to point out that, “TC Williams, Cesar Chavez, and Spring Brook also attended.”

Students didn’t have to pay for the trip to the embassy. They were even given gift bags and H&M shirts with a student created anti-substance abuse logo on the shirt just for being at the seminar. It was an all day event. Students stayed engaged by working on slam poetry and visual arts projects.

Students had a lot to say about the day, Chris Robertson ‘16 and Anthony Tham ‘16 were really able to express how much they took away. “When we entered the embassy we looked at the wall of portraits and got to see the faces of people who have died from drug addiction, it was really sad to see how many lives were taken…they really made me think about how using drugs could affect my life,” said Tham.

Throughout the day, there were many speakers. One stand out spokesperson was Dr. Lonise Bias. She is the mother of Len Bias, an All American Basketball forward from the University of Maryland. Len was selected by the Boston Celtics in the 1986 NBA Draft. He tragically died in the two days following his selection from an irregular heartbeat induced by a cocaine overdose. He is considered by some to be one of the greatest players not to play at the professional level. Dr. Bias spoke about her experience being a mom with a son that died from a drug overdose. According to many students her speech was compelling and her story was powerful. She went in depth about how his overdose not only killed him, but it affected the family as a whole.

Robertson added his take away from the event, “Drugs don’t just physically affect you, they can really ruin your emotions too; drugs aren’t as small as they look…they really affect your life on a whole…no one should abuse them.”