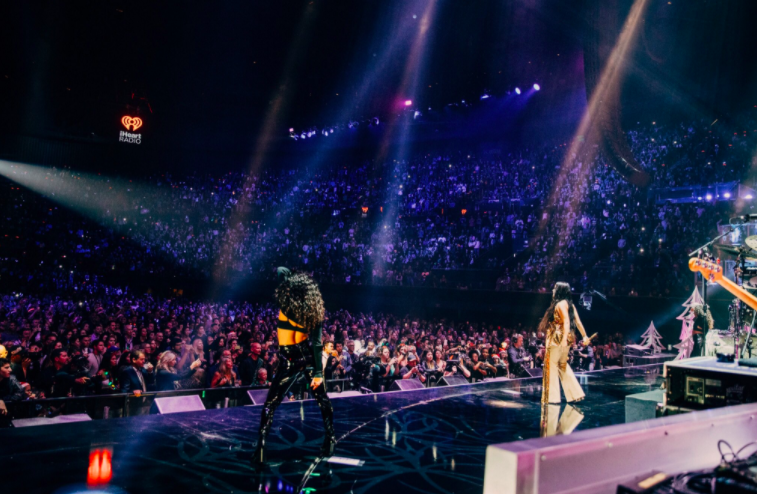 The Jingle Ball crowds make the concert even more enjoyable

This past Monday, December 11th at the Capital One Arena (previously the Verizon Center) was the annual Jingle Ball. Jingle Ball is an event where many artists come together and perform at one event. There were 10 total performers: Why don’t We, Julia Michaels, Liam Payne, Camila Cabello, Charlie Puth, Zedd, Halsey, Kesha, Fall Out Boy, and Logic. The concert began at 7:30 and ended around 11pm. Having seen half the artists before, expectations were high. The Jingle Ball experience made it even better.

The first performers of the night were the group Why Don’t We. They opened the show with an awesome visual and preformed their top hit “Something Different”. They had incredible choreography and brought insane energy and got everyone pumped for the rest of the night.

Next up was Camila Cabello, she came onstage hyped up. She sang beautifully and everyone was cheering. When the introduction to her hit “Havana” came on the whole arena screamed the lyrics at the top of their lungs, it was absolutely crazy. She closed with one of her newest songs, “Never be the same” which she told us was a very personal song for her and that it will be her next single. Overall she had a super fun set and had the crowd singing along with her the whole time.

Julia Michaels followed soon after. She has co-written countless songs for several mainstream artists like “Sorry” by Justin Bieber “Bad Liar” by Selena Gomez, and many others. She sang a medley of several of the songs she has co-written, and then ended her set with her first ever huge hit “Issues”. Everyone was singing along with her for the last few minutes of her set, the arena was full of happy fans.

Up next was Kesha. She was by far one the most energetic performers, she was yelling and dancing the whole time, except for while preforming “Praying”. During Praying the arena lit up with lights from thousands of peoples phones; it was beautiful and Kesha gave it her all. Lastly, of course she sang her huge hit “Tik Tok” as soon as the music began to play the arena fled with screaming fans as everyone jumped around in their seats singing along.

Following Kesha was Charlie Puth. He opened with his hit “Attention” which definitely got the crowd’s attention. He gave it his all, and sang all of his best songs. Typically he ended his set with the song that started it all for him “See You Again” which was by far the loudest song of the night. Honestly, everyone in the arena was singing along with him and it was amazing to hear everyone all sing together as one with him.

Zedd, the only EDM artist was the next performer and by far a huge fan favorite, he got everyone up and out of their seats. He played tons of his biggest hits like “I Want You to Know”, “Clarity”, and “Stay”. Everyone knew all the words to every song and at every drop everyone was jumping up and down with the beat. People were yelling, dancing, clapping, and all waving their arms back and forth during his whole set; it truly felt like the rest of the world had just stopped, and that moment was all there was. The best way to describe it is just magical.

Following Zedd, was Halsey. She opened with “Bad at Love” and everyone was yelling the lyrics along with her. Her visuals were stunning and really helped pull her set together. She then sang an acoustic version of her song with The Chainsmokers “Closer” which of course everyone knew the words to; and then she closed her set with her song “Now or Never”.

As the night was somewhat coming to a close, Liam Payne was the 3rd to last performer of the night. He opened with “Strip that Down” and had awesome backup dancers who had great choreography throughout the whole performance. He also sang his hit with Zedd “Get Low” and another one of his songs that was written by Charlie Puth “Bedroom Floor”. He had a really hyped set and everyone was dancing along with him the entire time.

Second to last was the hit band Fall Out Boy. They opened up with one of their biggest songs “Centuries” and there was awesome lights and fire on stage, they had a great set. Everyone in the arena was screaming and jumping when “My songs know what you did in the dark” started playing. They had everyone out of their seats and jumping around the whole time. They got everyone pumped for the last performer of the night.

Last but not least was Logic, he was the reason so many people were there, there were tons of people with Logic merchandise and so many people were so excited to welcome Logic back to his home, the DMV. Logic came out looking happy to be home but also not very well, he soon told us he had been sick all day but he couldn’t let down his home town so he had to at least perform his huge single “1-800-273-8255” As soon as the song began to play the arena lit up with a sea of lights. You could tell he wasn’t feeling well at all but he really gave it his all. After the song was over he gave a small speech about how all he wanted to do is spread an idea of peace, love, and positivity and how he is so happy to do what he can do to be able to inform people about the important issues that others are afraid to talk about. He only performed one song but it was definitely a huge favorite.

Jingle Ball is one of the very few events that you can go to and see a bunch of different artists of all different genres perform their top hits. I highly recommend going, even if you don’t know all of the artists; its a fun way to discover new music. It’s an amazing night with incredibly talented artists and it is always a fun time. This weekend is the last weekend of Jingle Ball, so go now.