Concerts 101: How To Survive 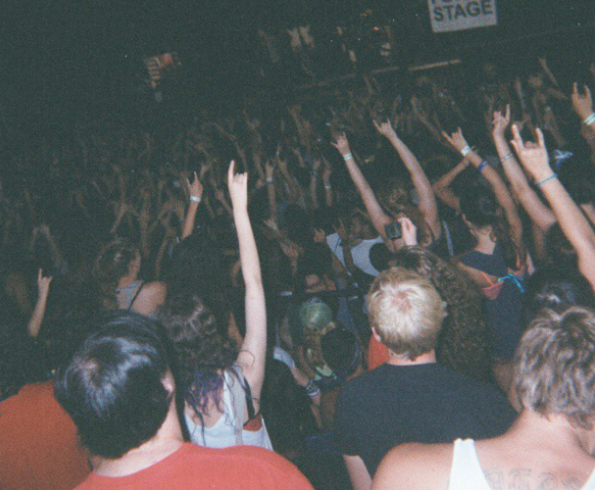 I’ve been to a few concerts including: Warped Tour 2012, It’s Now Or Winter, Warped Tour 2013, and The New Kings Tour. Summer will be here soon, so I certainly plan on going to more. While going to these concerts, I began to see a trend of problems and solutions. If you plan on going to any concerts of this genre, or any that are even remotely related to this genre, there are some things I would like to share with you. These tips can be the difference between life and death.

Bring your own water:

This tip is pretty much self-explanatory, unless you want to dehydrate, pass out, and get sent to the ER, you need water. I’m sure you don’t want to pay $5 for one small bottle of water. Just bring your own.

Make sure you eat before you go:

You will definitely need energy if you plan on standing in the crowd. Choosing not to eat would be a bad idea because you would feel too lazy to have fun and jump and wave your hands.

Nobody cares how nice your new flip-flops are, nor do people care about the safety of your feet. In order to prevent broken toes and/or ankles, wear closed shoes.

At the last concert I went to, It’s Now Or Winter, I wore Vans. They were basic shoes, but I still went home with feet pain. I had so many people step on my feet while standing in the crowd. It definitely would have been worse if my shoes were not closed in.

If you can’t handle the pit, don’t get in:

When I say the pit, I am talking about the mosh pit. It is really hard to explain what the pit is and how it works, so I suggest you check it out on Youtube. But, according to the Urban Dictionary, the mosh pit is a dangerous genre of dancing related to heavy metal/rock music usually done in crowded areas by pushing, shoving and jumping. The denser frontal part of a concert gig will usually have the crazier stunts such as trampling and crowd surfing. Also according to Urban Dictionary, the side effects of moshing may include, but are not limited to: light-headedness, bruises, bloody noses, broken noses, loss of balance, and in extreme cases unconsciousness. Unless you can handle yourself and the possible things that may happen to you while you are in the pit, I suggest you not go in the pit.

There will be many people, both big and small, attempting to crowd surf at gigs. At the last concert I went to, I swear I got hit in the head at least seven times, and then in the face at least 5. The problem of getting hurt by crowd surfers is typically worse if you are short (like me), so I suggest that you duck whenever you have at least some sort of warning for an oncoming crowd surfer. However, I might add that most of the time, you will not be warned because the music is typically very loud.

There will be a lot of pushing and shoving during each set because you will not be the only one trying to get a good view of the band. People will push you and they will get in front of you unless you stand your ground, without letting people push you out of your spot. However, if you’re short (like me) you will have trouble with this because there will be people bigger than you. If this is the case, explain to them how you are short and maybe, just maybe, they’ll let you stand in front of them.

This is really dependent on the venue you’re at, but I think that it’s smart to have a sharpie handy. If you casually see a band member walking around, they most likely will not have a sharpie in their hand in case they see a fan. However, this statement is different for signings because they specifically plan to sign things for fans and will be prepared with a sharpie.

Bring a backpack (if you don’t plan on moshing):

This tip doesn’t need much of an explanation. If you plan on buying merch before it sells out, you will need a place to put it. Unless you have the opportunity to go back to your car after you get checked in, I suggest you bring a backpack. Plus, you wont have to worry about losing things out of your pockets during a set.

If you plan on moshing, I don’t suggest you wear a backpack. Not only will it weigh you down even more, but you also could have your bag broken. That happened to me at Attila’s set at Warped Tour 2013, and lucky for me, I realized it before too many things fell. Generally though, if I plan to mosh I won’t bring a backpack.

Leave the phone in the pocket: (Also, don’t try to take pictures during each set.)

Picture it, your phone is being stupid while your favorite band is playing a nice song, and you miss it because you were too busy messing with your phone. Don’t get too caught up in your phone or camera, enjoy yourself while you still can. To be honest, there will be other people posting pictures of the concert, and you can just save theirs. No biggie.

If you keep all of these things in mind, you wont have a problem enjoying yourself and having the best time you can at the concert. Happy concerting my friends!