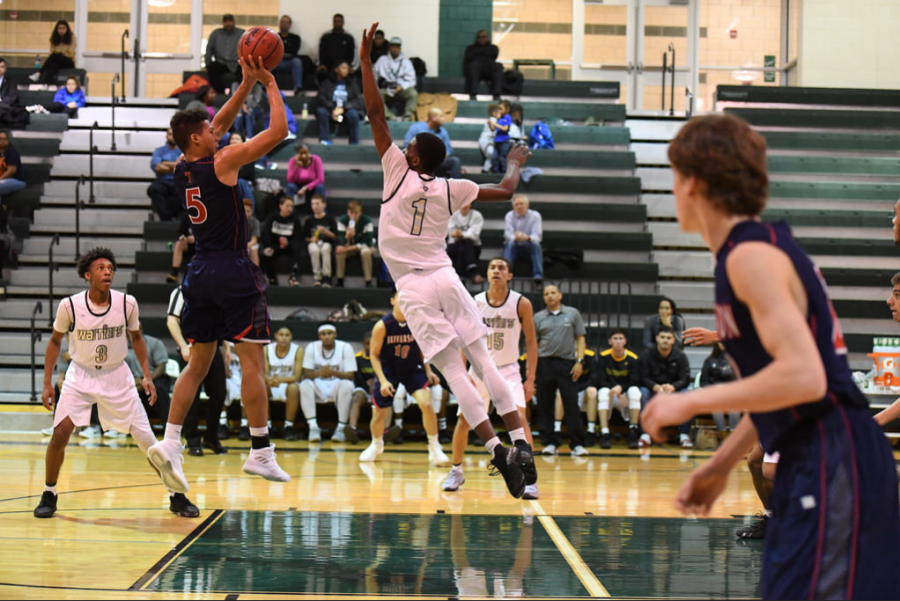 Wakefield is on a hot streak! They won 7 consecutive games with Marshall losses bookending that streak. The Warriors won’t let those Marshall defeats stop them from preparing for the playoffs. Wakefield is now 15-5 Overall and 8-2 in the District.

Here’s a recap of the last 8 games:

The Warriors won by a very close score of 63-62, as it came down to the wire to decide the game.  Senior A’Mari Cooper led the team with points and rebounds as he scored 19 points and grabbed 14 rebounds. Juniors Chris Warner and Gabriel Tham both added clutch baskets and combined for 24 points to help the Warriors pull through for the tough win.

Wakefield took on the Lee Lancers and got off to a fast start and never looked back, winning 90-51. A’Mari Cooper was the leading scorer with 18 points, 8 rebounds, and a couple thunderous dunks. A’Mari Cooper said, “just get out of my way when you see me coming down the lane.” Ben Horsford put up 12 points. Senior James Clark, sophomore Aaron Queen, junior Robert Starkey, and Chris Warner all tied with 8 points. Junior Jared Watkins finished with 7 points and threw down an alley-oop dunk heard all around Twitter from Lukas Hatcher, who had 5 assists.

This game was highly anticipated as Edison came in undefeated in conference play (4-0). The game lived up to the hype as the first quarter was very intense and fast-paced as saw a 20-20 tie. In the second and third quarters, the Warriors started to pull away and score more often while at the same time stopping Edison with their stellar defense. The Warriors were lead by A’Mari Cooper who dropped 27 points and Chris Warner who scored 21.

The Warriors took on Falls Church and won 88-59. After a slow start, the Warriors were able to gain momentum and win the game. At the end of the first quarter, the Warriors led 19-13. Wakefield put up 24 points in the second and third quarters, outscoring the Jaguars 45-23 in the second half. A’Mari Cooper was once again the leading scorer with 20 points, 10 rebounds, and 5 dunks. Robert Starkey had a career-high score of 18 points going 9/12 from the court. Jared Watkins scored 11 points and had 1 exhilarating dunk over a Falls Church defender. Jared said, “I don’t know why the defender jumped but I did surprise myself in how I was able to dunk it like that.” Teammates Aaron Queen and Chris Warner both finished the game with 8 points. While senior Ben Horsford had 6 assists.

This game was one of the most exciting ones yet. Both teams were neck and neck throughout the entire game. After 4 tough quarters and one buzzer beater from Ben Horsford to secure the win. Wakefield was trailing 18-19 at the end of the first quarter. The second quarter was different, the Warriors came out hot and ended the first half leading 37-33. The boys kept up the intensity and held on to the lead, finishing the third quarter 52-45. The fourth quarter came, Wakefield was on top and thought this game was easily over, but TJ came out with a fire that had never been seen before, the rallied together, tying the game 61-61, causing the game to be continued into overtime.

Both teams going back and forth in overtime, leaving the fans with no clue who was going to end victorious. Until Ben Horsford had the ball in his hands took one step, and pulled up from the three-point line to win the game as the buzzer sounded. Horsford said, “Once the ball was in my hands I knew it was up to me to bring this one home.”

The Warriors continued their winning streak on Tuesday as they played Stuart Hs (now called Justice High School). They dominated the whole game controlling both offense/defense and were led by Ben Horsford who had 14 points and A’Mari Cooper who had 13 and 8 rebounds. As they ended up blowing them out as they won 73-42

Wakefield lost to Marshall for the second time this season 69-62. A’mari Cooper had 21 points and 10 rebounds and Chris Warner added 10 points.

Wakefield won against Falls Church on their court shaking off the Marshall loss.

The Warriors now improve their record to 15-5 on the season and play 1 conference game against Lee before their last home game of the season which is SENIOR NIGHT against Edison on Friday, Feb 9th at 7:30pm. Make sure to come out and cheer on our Warriors!