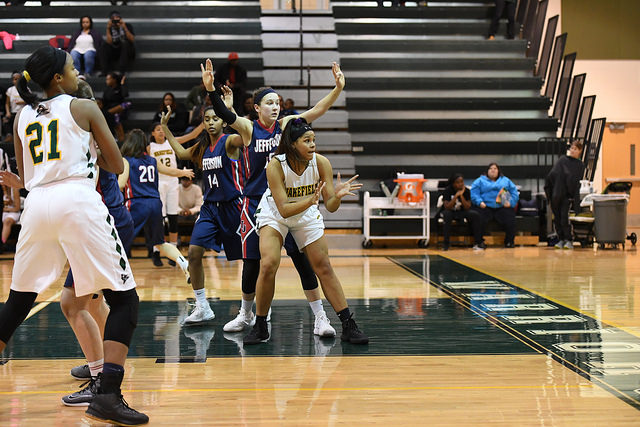 The Girls varsity team has made some major strides this season with a 10-6 record. They are hungry for two wins this week, and are ready to make a run in the playoffs.

The Warriors girls varsity played our rivals Marshall on January 26th and put up a strong fight, the Warriors were down the whole game getting outscored but made a tremendous comeback in the 4th quarter. It wasn’t enough for a win, but the Warriors showed no mercy.

In their next game against Coppin Academy, the Warriors played without the lead for most of the game. They had a big turn around in the second half. Jami Tham lead the team with 22 points and 15 rebounds. This was a crucial win for the Warriors and helped them stay well above .500.

In the game against Falls Church, the Warriors were up by one at the half. The Jaguars crawled back and tied up the score. Then the girls shot a barrage of threes, which changed the tone of the game. With some clutch shots by sophomore Jayela Lopez, the girls sealed their 9th win.

In their most recent game, the Warriors had a big win against Massaponax. Both teams started slow but the Warriors were able to pick up their play for the game, especially in the 2nd half. This was a break out game for Jayela Lopez who had 17 points, 15 rebounds and 6 blocks. This was a major win that propelled the Lady Warriors to 10 wins with two games left in regular season play.

See you tonight at 7:30pm at home vs. Lee High School. It is Senior Night, Best Buddies night, and Future Leaders of America night. Wear Tie-Dye to get in for $2.