A Night in A Box to Raise Awareness 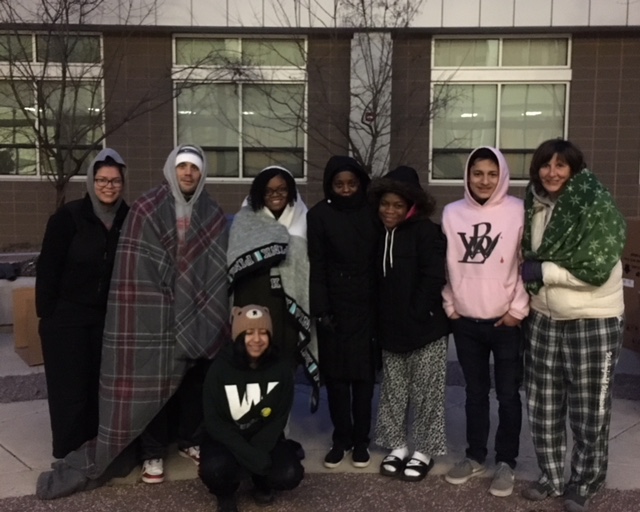 On Tuesday, February 27th five Wakefield students spent a Night in A Box. Wakefield started participating in The Night in a Box last year. Students who have Senior Projects related to homelessness and mental illness are invited to participate. They have to sleep outside in Wakefield’s courtyard to help bring awareness to the issue of homelessness in a county that is known for it’s wealth. This year five seniors participated in the event.

Ms. Labella said she has “great respect for these five students who made it through a 40 degree night in boxes, to raise awareness and money for the homeless in our community. It was an evening of great discomfort, discussion and introspection.”

Uriel Reyes, Ashley Reid, Amore Gant, Ruth Mengesha, and Syeda Shamsuddin joined Ms. Labella, Mr. Cabana, and Ms. Hill in the freezing temperatures to get a small experience of what it is like to be without a home.

We interviewed the seniors and staff on how they felt afterward. Uriel said, “it was harder then I expected.” The temperature got as low as 36 degrees that night, so it wasn’t a comfortable experience. Ashley added, “I should be more grateful, and not take things for granted.” That is a great motto to live by, Ashley. Amore expanded further, “I learned to treat people with more respect and don’t be so quick to judge a book by it’s cover.”Beyond the freezing temperatures, Syeda said she remembered “the hunger the most. I was really hungry, but at some point the hunger sort of subsided and I fell asleep.” It was only one night, and there was access to a bathroom, but everyone seemed to really feel the fatigue associated with sleeping outside and the difficulty with getting comfortable when trying to make a box a temporary shelter.

Senior Project teacher Mr. Cabana said, “I could not imagine going back there a second night, and could not imagine if the weather was worse than it was that night. Being at work for a full day immediately after also taught me lessons about perseverance…This experience is one I will never forget. It had a much greater impact on me than I imagined. I have gained a deeper appreciation for what I have.”

Maybe we should all spend a night in a box to better appreciate how blessed we are to have what we do, Wakefield.

When asked what else they wanted to do to help, Amore Gant said since she was in middle school she has had, “this idea to have a shuttle to pick up homeless people, because one of the reasons they don’t go to get a job is because they don’t have the transportation.”

Ms.Labella has established a Go fund me page; they are just over half way to reaching their goal: https://www.gofundme.com/night-in-a-box-to-fight-homelessnes.