Varsity Boys’ Basketball in a Show Down for Conference Championship 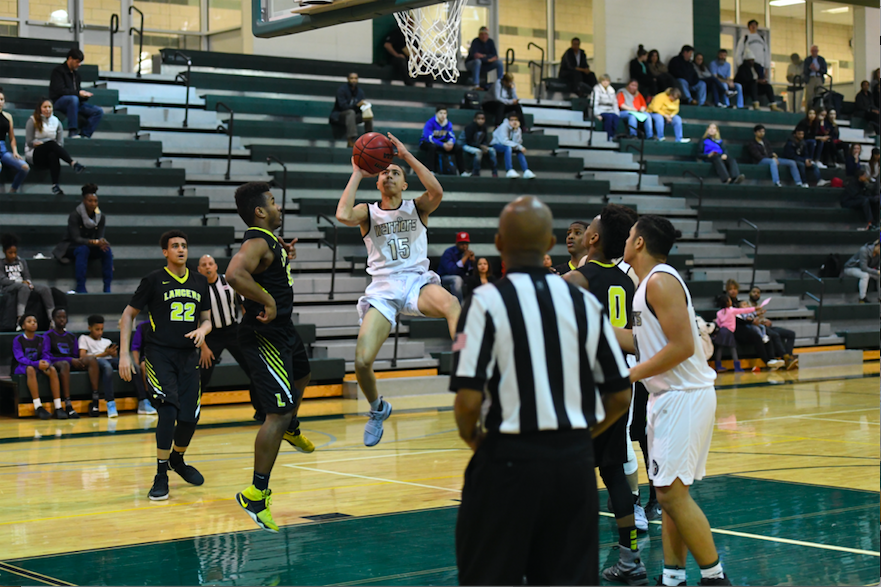 Senior Ben Horsford goes up for a contested shot against LEE High School.

Junior Robert Starkey said, ” Our recent few weeks have been the best of the whole season, practice and games are going a lot better and give us a good feeling about our future.”

The boys took on the Lee Lancers at home on February 6th in an eventful match. Wakefield crushed Lee in every aspect of the game, offense and defense, we did it all. The final score was 73-50, with Wakefield holding the lead the entire game. Junior Gabriel Tham had the best game of his career, being the leading scorer with 28 points, 6 rebounds, 6 steals, and 6 assists.

That win got Gabe thinking of the future; he said, “We’ve spent a lot of time together as a team and becoming closer as a unit, what we’re focusing on now is obtaining a stronger defense that no one we play can compete with.” 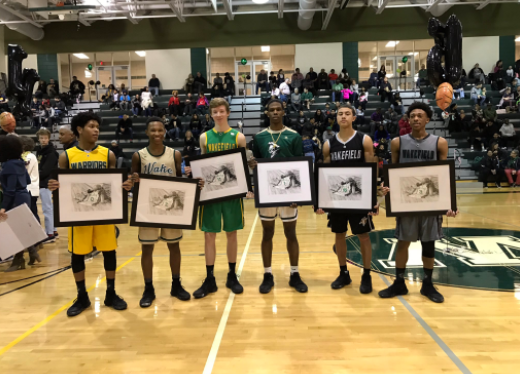 Wakefield competed against the Edison Eagles in an exciting game on February 9th for Senior Night. Seniors Jaylon Fall, James Clark, Jonathon Parker, Lukas Hatcher, Ben Horsford, and A’Mari Cooper couldn’t have asked for a more perfect game to end their regular season. Senior A’Mari Cooper had to switch up his game based on ref calls. Instead of being a dominant play maker, he had to pass to Robbie and Jared in the 3rd quarter to add points on the scoreboard. 4th quarter, Lukas, Chris and Ben had to keep the ball moving to keep the lead. In the end, the boys were victorious, with a final score of 74-57.

The Warriors began their #RoadToStates run on their home court against the Lee Lancers on Tuesday, February 13th. After playing Lee a few days before, the boys knew that Lee was no match for their skills. To no surprise, Wakefield came out with the win over Lee with a final score of 70-36 with the help of an outstanding performance by senior Ben Horsford.

With round one of the playoffs complete, the boys were hype. As soon as the Lee game ended the team immediately had their mind set on round 2 against the Edison Eagles. With a little more intense match up, they were still set and ready for a win. Slowly but surely, the Warriors kept up their strong game on both sides of the court and came out with a final score of 70-51 and a victory over Edison. This could not have happened without the strong offense from senior A’Mari Cooper with 14 points and junior Brody Karton with 13 points.

Brody Karton said,  I was glad that I got the opportunity to play and show off my skills and after this win we feel really confident going into the championship.”

One step left in the conference playoffs, the Conference Championship. The Warriors have had a strong playoff run so far. They will have to use all of this momentum going up against their biggest rival, the Marshall Statesmen. Marshall has played well throughout the regular season and playoffs. Marshall beat us twice in the regular season. Last year, the Warriors won the Conference Championship over the Statesmen with a very close game on Wakefield’s court. This rivalry runs deep, so A’Mari, Chris, Ben, Lukas, and the rest of the team have to work together to find holes in Marshall’s defense.

The Warriors play TONIGHT against Marshall High School @ Marshall at 7:00pm. The boys are ready to take home the trophy to where it belongs, at Wakefield. Come out and support your boys as they take on the Statesmen in a game you DO NOT want to miss! #WarriorNation