Walkout is A Wake Up 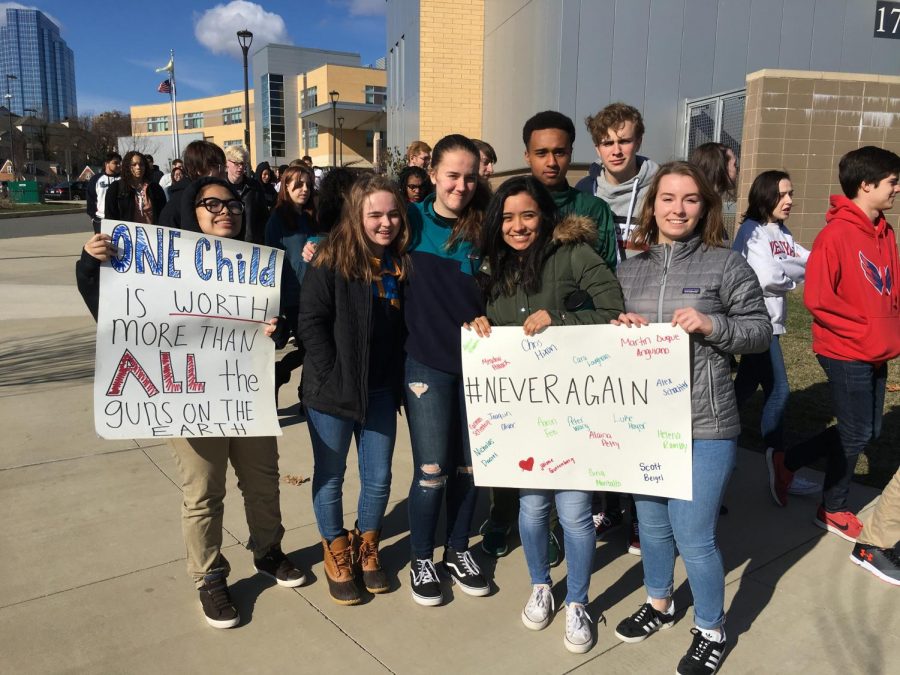 Wednesday, March 14th, was the one month anniversary of the Parkland shooting and also National School Walkout Day. Wakefield students participated by doing a die-in on the football field for 17 minutes to remember the 17 victims who were killed in the shooting at Marjory Stoneman Douglas High School.

On Saturday, March 24th, the March for Our Lives will take place in Washington, DC and other places around the country. There will also be a walkout on Friday, April 20th, the anniversary of the Columbine shooting. These walkouts seem to be a physical protest by students showing the helplessness we feel in the wake of witnessing 17 people die on social media while at school.

During the most recent walkout, students left the building at 10:00 am and headed for the football field. Everyone laid down on the field for 17 minutes of silence, shivering from the cold, but remembering that those who died would be cold forever. Junior Anton Katula said, “I think that it’s very unfortunate that we have to do this, that we have to go outside and lay on the ground for 17 minutes in order to prove a point.”

There was a bit of a miscommunication that the 17 minutes didn’t start until everyone was lying down. Senior, and Social Justice Club President, Gabby Gelaye said, “the time frame was 17 minutes in honor of the 17 victims. People left at 10:17 because they assumed that we had been there since 10 (even though we started at 10:10).”

While a majority of the people out there were quiet and laying down, there was a group of people standing up and talking around the edge. Junior and Equal club president Hannah Jones said, “if there’s a walkout and there are a lot of people are doing it, it doesn’t mean that you have to do it… going outside and talking with your friends is being disrespectful because that’s really hurtful to the people who either have a personal connection to this or really care.”

Hopefully next time we can all find a way to do our part in this protest, whether that is going outside to show our opinion to the world, or staying away to let the people who need to express themselves have the space to do so.

Some schools threaten punishment if students walk out of class. Our school administrators are “allowing” students to walk out at Wakefield. How do our students feel about this?

“It doesn’t defeat the purpose, it makes it feel less effective. But as long as the message gets across…I don’t see the problem.” said senior Cierra Jenkins.

It boils down to these questions: What are we fighting for? Who are we fighting? While we all know that our school isn’t trying to hurt us, some students feel that they are stifling our voice by trying to prevent us from doing things off campus and giving us time limits. The staff sees a different view; they feel as if they are helping us make our voices heard in a safe manner without taking away from school. Both sides are valid, but this game of chicken needs to stop. Either we, the students, need to become more organized and make plans for what were are going to do regardless of administration approval, or we have to take what we get from the school, who is trying to let us yell and be angry in our bubble of safety.

Some schools are trying to come up with other ways students can protest. Students are being encouraged to “Walk Up”, not Walk Out. “Walk Up” to 17 people you wouldn’t normally talk to, and…talk. Some say that this is another way for the school administration to try to stop student voices. Others say that it is a powerful way to honor the 17 victims of the Parkland shooting. Why don’t we do both? We should be trying to make connections with new people anyways, but especially since school shooters tend to feel left out this is another way to prevent school shootings. We should continue these peaceful protests, and also building new relationships and reaching out to others is important.

Sophomore Bodhi Patil shared some encouraging words when he said, “Wakefield embodies love for all and one of the major things of this walkout is spreading the love to all the victims and their families, and also recognizing that we all play a role in contributing to a healthy society.”

Are these walkouts effective? Or are they a way for students to feel like they are doing something, to feel like they are safer, when in fact nothing has changed? The shooting has lost front page coverage. The victims’ names are starting to slip away from memory. The tragedy stings less as time moves on. What can be done to keep the momentum going? What can be done to actually affect change so that it can really be #neveragain?