Love Has No Gender 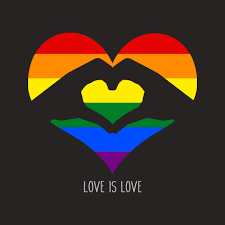 In today’s world, some people still have an issue with accepting that love comes in all forms, that love has no labels. Same-sex couples can be looked down upon as un-natural. I personally find it infuriating to be against love because of gender. No matter what race, gender, or label, love is love!

I was in the car with a friend and realized they were homophobic. We were driving along and he saw a man dressed in tight khakis and a little pink sweater. He started talking about how it was unnatural for a man to like a man and how it was appalling to look at gay love. The fact that he would call someone disgusting just because he didn’t agree with their sexual choices really made me want to curse at him. When I tried to talk to him about it, he brought up the Bible.

How can you use a book as an excuse to show hate towards someone’s love? I was raised as a Christian, ever since I was born, but fortunately, I was raised by great parents. When I was a child, my parents taught me to be accepting of everyone. I was raised to understand that loving someone with a different race, gender, or label is ok, great even.

People should be able to love without the fear of being judged. Love has no sexuality, race, skin tone, or gender. Love is something special between two people. The feeling of love is indescribable; words can barely explain the feeling.

Their sexual choice does not determine who they are as a person.

When a man marries a woman it is viewed as acceptable, but when a homosexual couple gets married, or a transgender couple, it’s suddenly viewed as wrong. What makes their love so different, so hard to understand? What gives anyone the right to judge them?

I don’t understand why people are so concerned about other people’s love life. I don’t see why people get fazed by who someone likes. It really doesn’t concern you if someone likes someone who identifies as the same gender, or non-binary. Some cis people act as if these couples are taking away their right to marriage. They can show so much hate and anger, and use poor excuses to back up their opinions.

A few years back there was a shooting in Florida at Pulse, a club where many gay men go. A cis man decided to shoot up that club in an extreme act of hate and violence. It isn’t just about that hate crime, all hate crimes are just as destructive. It is just as bad as calling people names, telling them they don’t fit in, or that God doesn’t love them because of something they can’t even control.

They are just normal people who love.

At the end of the day, you should love whoever you want, because no one should be able to dictate who to love.