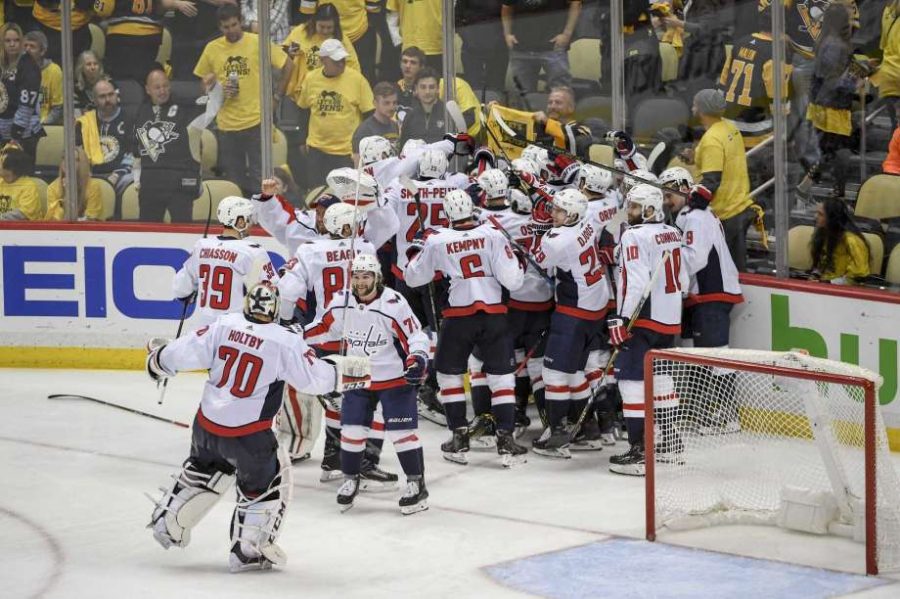 After blowing 3-1 series leads, getting swept by the underdog team, and probably the worst of all…losing to their rival, the Pittsburgh Penguins, 2 years in a row, the Capitals finally have done it! They beat the Penguins and advanced on to the third round of the playoffs! In a dramatic game 6 overtime win that electrified all Caps fans, they broke the 20 year curse.

The Capitals wouldn’t have had this success without huge performances in the regular season by team captain Alex Ovechkin, who led the league in goals with 49 this season. He received help from his defensemen, Evgeny Kuznetsov and Nicklas Backstrom, who both had over 50 assists.

The Capitals beat the Columbus Bluejackets in the first round of the playoffs in 6 games, winning the last 4 in a row after making a goalie change from Phillip Grubauer to Braden Holtby. The Capitals then carried that momentum into the second round as they squared off against the 2 time defending champions the Pittsburg Penguins.

After losing a very disappointing game one, the Capitals turned it around and won the next two games including a crazy game-winning goal in game 3 by Alex Ovechkin with under a minute left to secure the win. According to ESPN, Ovechkin said, ” Once I got the puck in my hands I knew I had a good opportunity to get a good shot off and win the game.” The Capitals then lost game 4, and won game 5.

It was time for game 6. The Caps knew what was at stake. The game was very defensive and intense.  It was tied at 1-1 at the end of regulation going into overtime. Less than 5 minutes into overtime Alex Ovechkin stole a pass from the Penguins, then quickly flicked it up ice to a fast moving Evgeny Kuznetsov, who shot the puck past the Penguins diving goalie to give the Caps a 2-1 win, and a Conference finals appearance, and an enormous celebration in Washington.

According to ESPN,after the game Kuznetsov said, “I don’t wanna lie, it tastes a little bit better to beat Pittsburgh.”

After 20 years of disappointment and heartbreaks, the Caps have finally moved to the next round and got to beat their rivals, the Pens, in the process.

The Capitals now face the Tampa Bay Lighting in Conference finals. Game 1 is tonight at 8:00pm; don’t miss it.