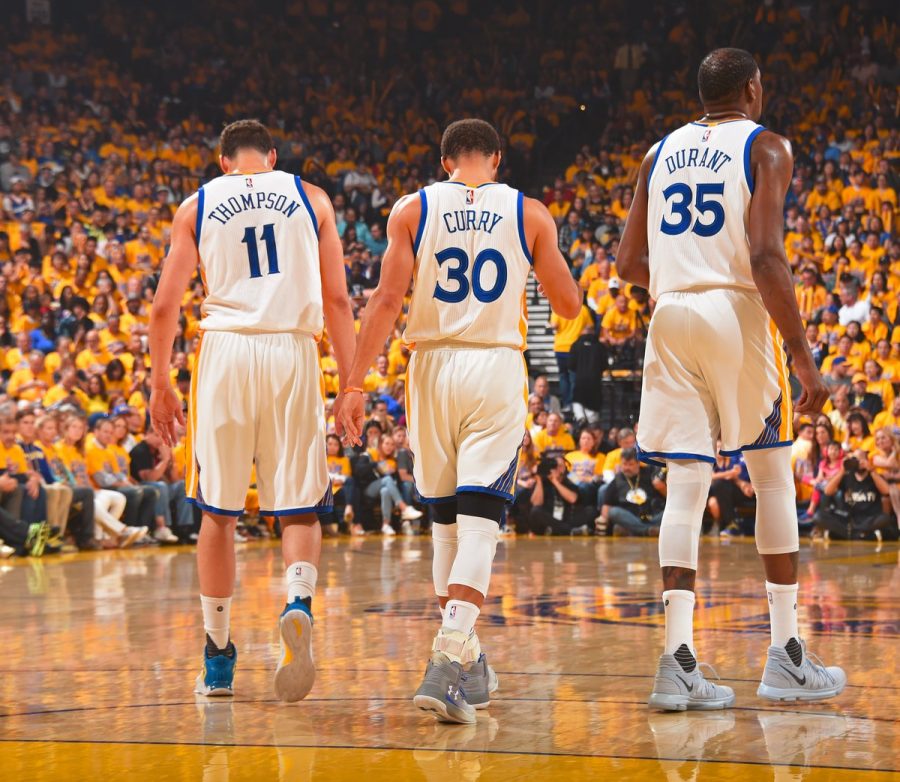 The 2018 NBA Finals are underway. We are on to Game 3. For the fourth year in a row, the Golden State Warriors face the Cleveland Cavaliers. Warriors have won 2 of the previous 3 finals. Everyone thinks that the Warriors will add another banner to their rafters after all is said and done.

We asked a few students who they think will come out on top this series, and their answers were pretty lopsided. Junior Rodney Lee said “the Warriors will win. The Cavs might have LeBron, but everyone on the Warriors gets buckets.” Senior Jonathan Parker agreed; “Warriors in 6. LeBron can’t carry the Cavs again.” Senior Leo Salazar also said, “the Warriors will win easily. The Cavaliers are pretty bad.”

At the beginning of the season, this was the predicted finals matchup, but both teams faced surprisingly difficult roads back to the championship series:

The Warriors, during the regular season, dealt with an ankle injury to Steph Curry, taking him out for a large chunk of the season. They also dealt with the rise of the Houston Rockets, who after acquiring Chris Paul, became the best team in the league, having arguably the best backcourt in the NBA with him and James Harden.  The Rockets dethroned the Warriors from their #1 position in the West that they had held over the past three years, and pushed them to a 7 game series in the Western Conference Finals. Ultimately however, the Warriors came out on top.

The Cavaliers faced an extremely difficult road back to the finals. After struggling for the 1st half of the season, they had an extreme roster makeover trading away nearly half their roster including the struggling Isaiah Thomas and Derrick Rose in effort to find a solution to their problems. The Cavs still struggled, puttering into the playoffs as a 4 seed (their lowest since LeBron’s return to Cleveland).

In the first round of this year’s playoffs, the Cavs faced the Indiana Pacers. The Cavs struggled in this series, losing the first 2 games. For a moment it looked like LeBron’s streak of appearances in the last 7 NBA finals would come to an end very quick. It took a 7 game grind for the Cavs to finally take down Victor Oladipo and the Pacers and finally advance.

After a quick 4 game sweep of the Toronto Raptors, the Cavs once again lost the first 2 games of the Eastern Conference Finals to the Boston Celtics. LeBron took full control, willing the team to game 7, and pushing them to victory.

So, here we are again: Cavaliers vs. Warriors. Even though it is the same teams as the last 3 playoffs, and the Warriors are slated to win, the basketball is still exciting to watch. The series started last Thursday with Game 1 in Golden State and was nothing short of intense. The Cavaliers entered game 1 as a 12 point underdog, and are statistically one of the worst teams to ever make it to the NBA Finals.

Game 1 was close the entire 48 minutes of regulation, with Golden State’s lead never rising above 7. There was controversy with a unique overturned charge call in the last 2 minutes of the game. This is the moment that everyone talked about on Friday; JR Smith running out the clock. After a missed George Hill free throw to give the Cavaliers the lead with 4.7 seconds left, JR Smith got the rebound. Instead of putting the ball back up 10 feet away from the basket, calling a timeout, or passing to LeBron (who already has 2 game winners this playoffs), Smith dribbled the ball out, not realizing the Cavaliers did not have the lead. The game headed to overtime, where the Cavs fatigue got the best of them and the Warriors put them to sleep with little competition, winning 124-114.

Game 2 last night was not nearly as close as Game 1. The Warriors had at least a ten point lead for most of the game, and Steph Curry had a historic shooting performance setting the record for most made 3’s in a finals game…9. Kevin Durant and Klay Thompson each had strong performances as well, adding on 26 and 20 points, respectively. LeBron James once again carried his team, posting 29 points, 13 assists, and 9 rebounds. The Warriors shot 57.3% to the Cavs 41.6%, being the key difference resulting in a final score of 122-103.

The Warriors will win this in 6 games. Golden State has been the dominant team in 2 of the 3 previous finals matchups, and I don’t see this to be any different. The Cavaliers do not have the offensive firepower to keep up with Steph Curry, Klay Thompson, and Kevin Durant when they are firing on all cylinders. A return from injured Andre Iguadola is expected soon as well, making the Warriors even more deadly. Although LeBron is the greatest player in the world, and makes any victory against the Cavaliers tough, as seen in these first two games, he just doesn’t have the right teammates to support him in bringing Cleveland another championship. Dr. Willmore feels like the Cavs will win. When asked who would win this NBA Finals, he said five words, “Cavs. Lebron James. The King.”

Tune into game 3 of The Finals, Wednesday at 9pm on ABC.