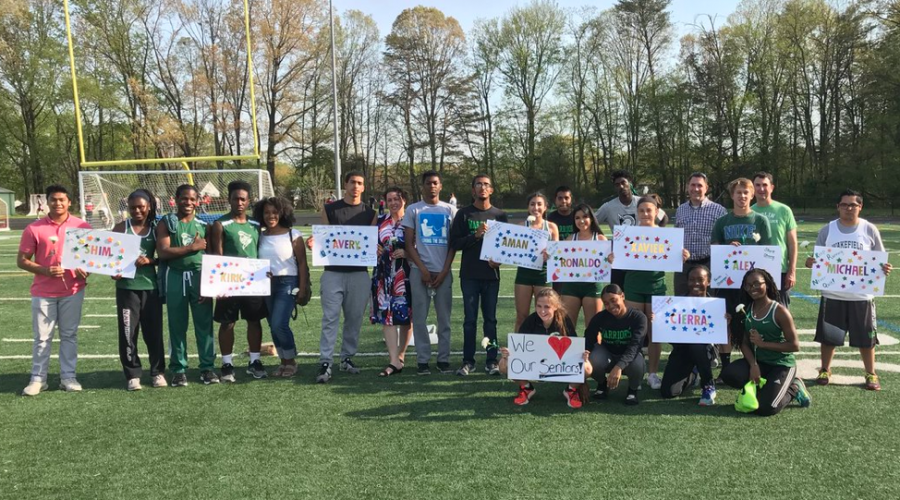 This season was a historic one for the Wakefield 2018 track teams. Between being the district runner-ups and placing 3rd in the region, the boys had a terrific season. Senior Cierra Jenkins spearheaded the girls team, placing 6th at States in the triple jump. The wins were certainly a team effort, but it was the seniors who truly shined this year.

The hard work the athletes put in at practice certainly paid off. Senior Xavier Taylor, who won three gold medals at regionals and placed second in the 4×100 relay, and senior Cierra Jenkins were named the male and female athletes of the year at the Spring Sports banquet. Senior Louis Delcore won the regional title in the 300m hurdles. “It was a really great experience to learn from the seniors, and hopefully with new runners, the girls team will be able to grow even stronger next season” said freshman Kareena Stowers.

Senior Aman Haileselassie, a mile runner, came in second in the region, losing the first place title by only two-hundredths of a second. “Track taught me to stick to a goal, and to keep working at it until you accomplish it. My goal for myself this year was to make States, and I did. I could not be more proud of myself.” He placed 10th at States. He will be attending Old Dominion University in the fall, where he will be running for their track team.

Though it was an amazing season, there were some disappointing yet teachable moments. While discussing the 4×100 relay at States, senior Kirk Graham said, “We did okay. On our last handoff, Xavier got cut off, so we had to slow down. He got blocked so he couldn’t run at full speed, and we got third in our heat because of that.” He also shared the valuable lesson he learned from the experience, saying, “Things can happen that are out of your control, and you can’t do anything about it. Persevere.” You have to just keep running, Warriors. Senior Avery Moore, also a member of the 4×100 relay team, added, “You have to be mentally tough. Sometimes your body is tired, and it’s telling you to top running, but you have to push through.”

The end of the season meant that the team had to say goodbye to these amazing seniors. “I encourage everyone to come out for next season. I think there is a lot of hidden talent in the school, and I think new runners could really strengthen the team” said Aman Haileselassie.