Varsity Football Kicks Off The Season With Big Home Win 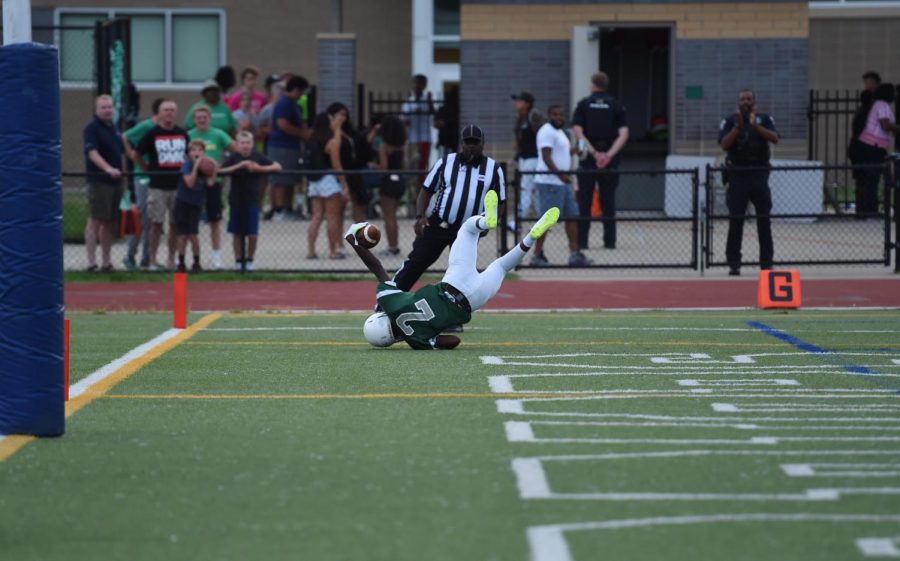 Last Thursday, the Warriors took on the Washington-Lee Generals in a cross-town rivalry  to begin the 2018 season. Our players dominated in all aspects of the game, and completed the game with a score of 33-20, and a 1-0 record.

This win over W-L should set the tone for the rest of the season. This is the second year in a row that Wakefield has taken the victory over W-L, and the first time since the 2000-2001 season where they have beat the Generals in two consecutive years.

After the game, Coach Hogwood said, “Our guys turned some easy catches into big plays and Cason moved the ball around and made some tough throws in traffic.” What a way to start the season, Wakefield!

To start the game off, the Warriors marched down the field on their first drive until eventually ending with a 23-yard touch down pass from junior and Quarterback Cason Poythress and a SPECTACULAR one-hand catch by senior and Wide Receiver Anton “BJ” Wallace. BJ said, “Once the ball was in the air, I knew I had to come down with it. I grabbed it with one hand and pulled it in for the TD.” The Generals responded with a touchdown but missed the extra point, making the score at the end of the 1st 7-6, Wakefield with the lead.

The second quarter started with a TD pass from W-L Quarterback Ryan Dodds making it 12-7, Generals. The Warriors came back even stronger with a 10 yard TD run by Poythress, taking back the lead making it 14-12. With 7 seconds left on the 2nd quarter clock, Wakefield had the ball and was determined to make a play.

They did just that.

Poythress threw a 34-yard pass to senior Wide Receiver Isaiah Calfee as time expired. Going into half time with a lead 21-12 over the Generals.

The third quarter had Wakefield pumped up; ready to put away the Generals and secure the win. Senior and Running Back Rodney Lee ran a 13-yard TD to bump the score up to 27-12. The Generals were held scoreless in the 3rd quarter.

The 4th quarter started with a TD run from the Generals’ RB making the score 27-20, trailing by a TD. The Warriors didn’t want there to be any chance of a comeback, so they marched down the field and ended the drive with a 1-yard run by Running Back Rodney Lee. Lee said, “Our offensive line did what they had to do and made it possible for me to punch it in to the touchdown.”

The game ended with a score of 33-20.  Wakefield was victorious; all their hard work from the long summer practices paid off and got their season started with a record of 1-0.

“We’ve been preparing for this game for weeks; we knew what we had to do, and got it done.” said Poythress after the game.

Make sure to come out and support your Warriors in the 2nd game of theseason. WEAR TIE DYE! #WarriorNation