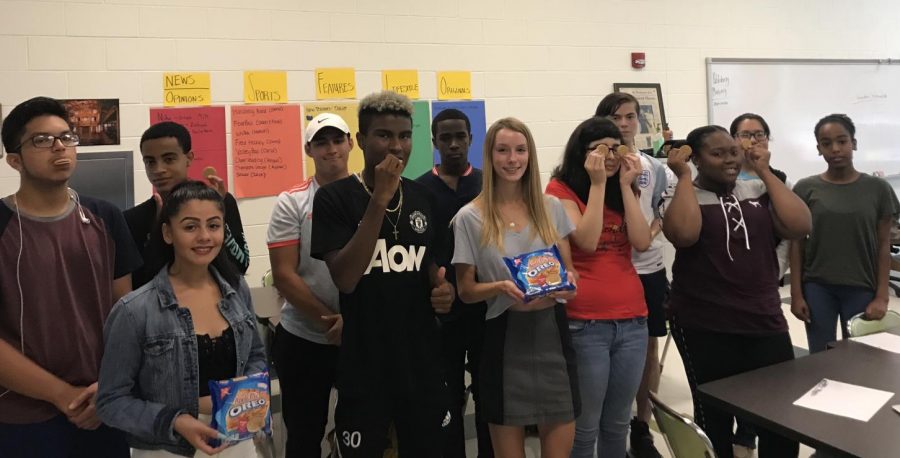 We tried the latest fall flavor from Oreo, Apple Pie Oreo which came out last fall.

It is fall, and you know what that means. Our reliable snacks are being taken over by ridiculous fall flavors. Oreo is the worst culprit of them all. From pumpkin spice to candy corn to carmel apple, they commit a number of injustices.How long will Oreo keep reaching in the dark for different flavor combinations? Last fall, they came out with Apple Pie Oreos; this is their biggest fumble (crumble fumble). These Apple Pie Oreos are back on the shelves to underwhelm us all and herald the beginning of fall.

The Chieftain staff tried these Oreos, so you don’t have to.

“They aren’t good. I wouldn’t eat them again unless it was life or death. They taste like a candle” said junior and Varsity Football Kicker Luis Pinto. Not everyone on the staff hated the cookies as much as Pinto. Senior and WRITE Place coach Grace Jones said, “They taste like oatmeal,” and she doesn’t like oatmeal. Junior and another new Chieftain reporter Andre Loera said, “They won’t even go good with milk.” What What kind of Oreo doesn’t go good with milk? You have gone too far with this limp reincarceration of the Carmel Apple Oreo. Why did you have to repeat that mistake for another fall season?

Although, some thought the graham cracker cookies and slightly cinnamon apple filling wasn’t that bad. Sophomore and new Chieftain reporter Carlos Wylde-Gladbach said, “The Oreos have a good taste, but the flavor is inaccurate. They just don’t taste like apple pie.” One or two staff members even liked the cookie part. One student went as far as to like the filling. Shock was heard throughout the room as junior and Wakefield fashion icon Kimberli Tellez said, “The cream tastes like the inside of Skittles, and I like that.” Senior and Wakefield Republican Club President Zach Saltos gave the most promising review of all; “They smell like gingerbread.”

Most students agreed, don’t put a piece of apple pie on a package if what is inside doesn’t actually taste like apple pie. Hopefully, with the next flavor release, Oreo will follow that simple rule.