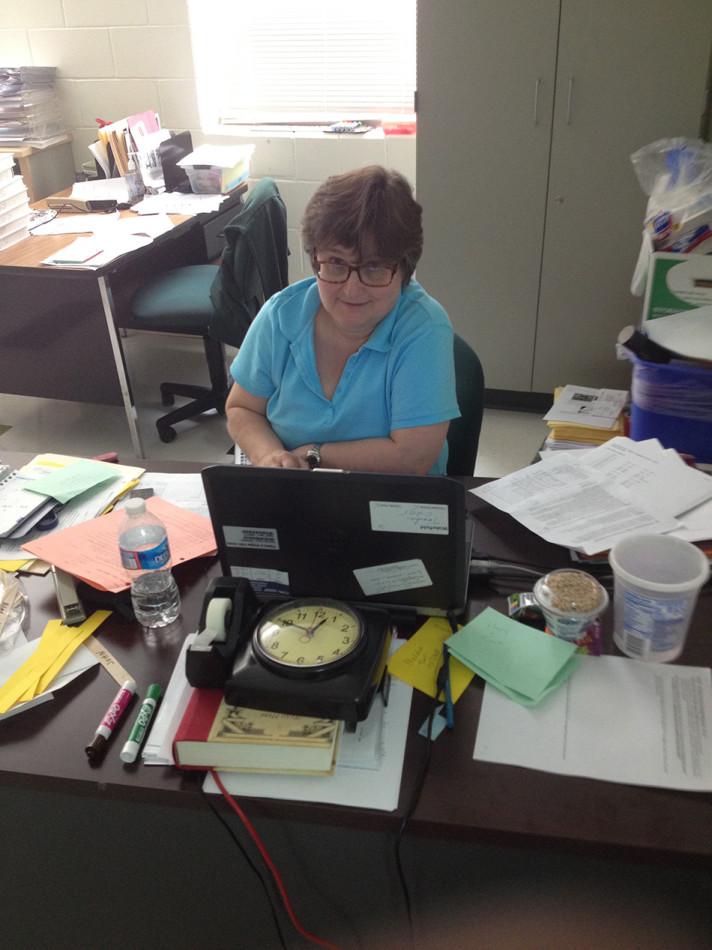 Ms. Fraley says time is of the essence when teaching.

Many know Ms. Fraley from the classroom, others just from her friendliness outside of the classroom. I recently sat down with this veteran History teacher to learn more about what got her into teaching, and what she did before she came to Wakefield.

Before she started teaching, Ms. Fraley graduated from UVA with a double major in Journalism and History. She caught a job as an editor and worked in newspaper for about 15 years. Over time, Journalism began to move in a direction she did not appreciate, “There was too much emphasis on 24 hour news, and I didn’t like it” she said firmly.

Since she had a a major in History, the idea of teaching crept into her mind, “I always liked school and always liked learning,” the now 13-year veteran said. She found “a program for career switchers” and spent two years at American University earning her teaching certification. The great thing about this set up was that she didn’t have to quit her journalism job until her student teaching began; making the career switch fairly easy. After a few classes at NOVA, since she only knew about American History, and student teaching at the Career Center, she interviewed for a job in Arlington.

Ms. Fraley interviewed with Kenmore, W&L and Wakefield, and got the job at each school. What made her choose Wakefield? “Well, they called first,” she said laughing, and then added that she liked the vibe of the school best (probably because she was interviewed by the wonderful Mr. Kelly). She said she couldn’t imagine teaching younger kids, including middle school, “it’s too much work,” she said smiling. Ms. Fraley enjoys teaching high school because the kids have already learned to sit down and be polite, there’s not as much fighting about following basic rules which lets her teach to her full potential.

Although it can feel as if the years run together, every new school year holds new surprises for Ms. Fraley. One of her greatest memories teaching is when President Obama visited. He came into her classroom and sang Happy Birthday. Here is a video. Her nonchalance about this little fact is probably due to her dislike of being the center of attention. “I never like when people sing me happy birthday” said Ms. Fraley, so you can only imagine how it felt to have the President of the United States sing it to her. “It was great for the kids in the class,” she said, humbly admitting that it was a pretty cool thing to have happened…“they will never forget that.”

Ms. Fraley talked about her first years as a teacher, “I was surprised by how much work there was” said Ms. Fraley. “You never have a break.” Despite the long hours, she greatly enjoys working with the students. “You do it because you see that you have an impact on the future,” she said, admitting it was pretty cliché thing to say, “but all those things are true, you feel like you’re contributing to the greater good.” The only thing she truly struggled with her first year was her editor instincts. “You can’t expect kids to be professional writers” she said. Her first year was filled with red-marked essays until she began to loosen up on the grammar editing and learned to focus on the purpose of the essays.