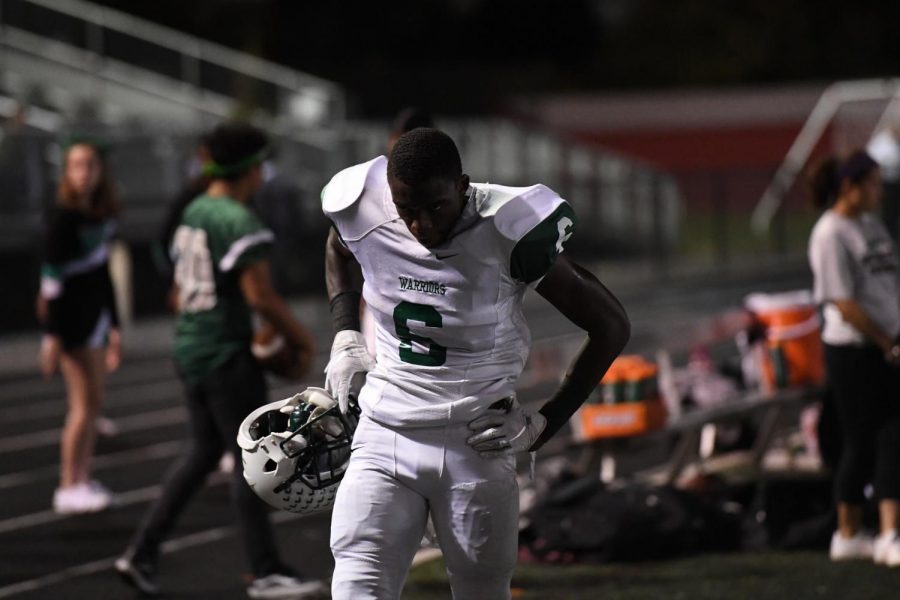 Senior Jaleel Prather steps off the field in between possessions to catch his breath.

Wakefield Warriors started the season off very promising, getting a huge early win against rival Washington Lee High School. The Warriors came out with an abundant amount of energy and never let up in the 30-20 win over Washington Lee. The season was looking bright for the Warriors, but they have now fallen into a slump, after losing key players and playing a tough schedule the last 3 games. Some players have returned, so tonight could be the night that turns the tide for Warrior Gridiron.

The Warriors were shut out against cross town rival Yorktown. They have not defeated Yorktown since 1995. The weather played a factor early on, and the game was postponed. Yorktown went on to win 49-0. The important thing about this game for the Warriors is that they played hard until the final whistle sounded.

On a two game losing streak, the Warriors looked for redemption but knew it wasn’t going to come easy against undefeated Mt.Vernon. The tough Mt. Vernon team came out aggressive taking a commanding lead into halftime. The Warriors couldn’t catch up.  It seemed as if it was a repeat of the Yorktown game, another shut out. A fantastic effort, led by junior Cameron Johnson, changed things. Johnson said, “It felt good to put points on the board.” His team showed tremendous effort in the last drive, making the score, 49-7. Johnson said, “I feel if we had a little more time, we could’ve put more points up.” The Warriors battled hard but just couldn’t manage to decrease the deficit.

The Warriors played Edison High School last Friday. A tough week in practice as people tried to fill in positions, and learn their new spots on the field. Junior Aaron Queen said, “We couldn’t capitalize on our tackling and it resulted in the amount of big plays they had.”  The Warriors fell 26-6 to the Edison Eagles.

The Warriors are looking to pull themselves out of this 4 game slump and get back on track. They’re capable of winning tonight and thriving for the rest of the season. Be sure to come out and support the Warriors tonight @ 7:00 as they take on National Collegiate Prep at home.