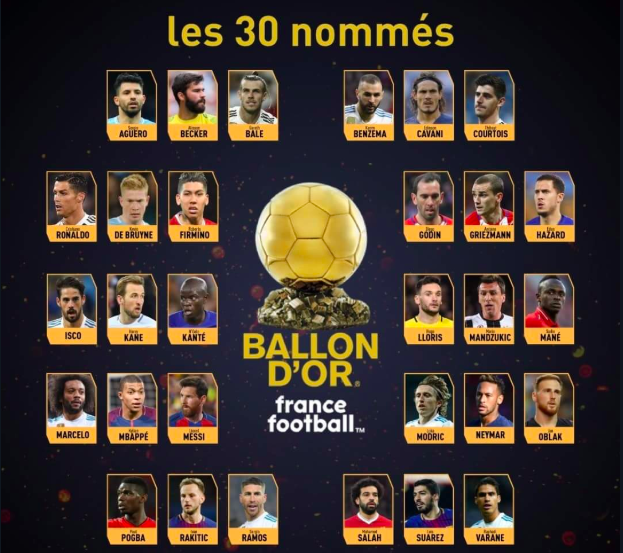 The Ballon d’or is the trophy that every player hopes to win. Cristiano Ronaldo and Lionel Messi crashed out of the World Cup at the last-16 stage this summer, so that leaves it open for a new Ballon d’Or winner this year.

These are the five players who are the favorites to win it:

Cristiano Ronaldo is the player who is a favorite to win the Ballon d’Or. The Portuguese captain has won the award for the past two years and five times in total. This Portuguese crack won the Champions League with Real Madrid again this year for the third consecutive time. He was top scorer of the tournament – for the third consecutive time, obviously. He was also the best player for Portugal during the World Cup, but it wasn’t enough to reach the QFs. Ronaldo has always been a favorite in winning, but recently he’s been involved in a lot of controversy and has had a poor start for the Italian giants Juventus. World History teacher and Liverpool Superfan Mr. Cabana said, “The winner of this award is going to be Cristiano Ronaldo because everything is sort of rigged in his favor, and he gets so much publicity from all the fans.”

Luka Modric is another player who can make a case for himself. This playmaker was outstanding in Real Madrid Champions league historic title triumph last season, scoring two goals and providing 6 assists as they became the first side in champion league history to win three straight champions league trophy.  He was an instrumental factor in Croatia runners-up in a World Cup finish. Wakefield JV soccer coach Celvin Sanchez said, “This year it should be Modric, he has been instrumental to both winning the champions league for Real Madrid and also taking Croatia to the World Cup final.”

Antoine Griezmann is one of the players to watch.  The Atletico Madrid forward finished third in the race for the Ballon d’Or in 2016 and could contend for a better finish this year. He also won the World Cup 2018 which was in Russia, also Europa league, the [UEFA] Super cup and finished second in a league. He won the Golden Boot in the 2016 Euros scoring 6-goals. The France International scored four goals in Russia and was one of his country’s best performing players.

Kylian Mbappé is another star who is in contention to win the Ballon d’Or after playing a pivotal role in France’s World Cup. This 19-year-old superstar wasn’t even alive when France lifted their first World Cup in 1998. This teenager helped PSG to win Ligue 1 and also helped France to win the 2018 FIFA World Cup scoring a goal in the final against Croatia. He won the Young Player Award in Russia after scoring four goals. His strike against Croatia made him just the second teenager in history to have scored in a World Cup final after Pele in 1958.

Mohamed Salah is another name who is an outside favorite to win the Ballons d’Or. He has been voted England’s premier league player of the year both by his fellow players and by the Football Writers’ Association. This 25-year-old broke several records in his debut season at Anfield. He won the Premier League Golden Boot award with Liverpool, and came second in the European Golden Shoe award with 32 goals.

Fans have to wait for six weeks to see who will win. On December 3rd 2018, the winner will be announced.

Who do you think will win the biggest soccer award of the year? Comment below.