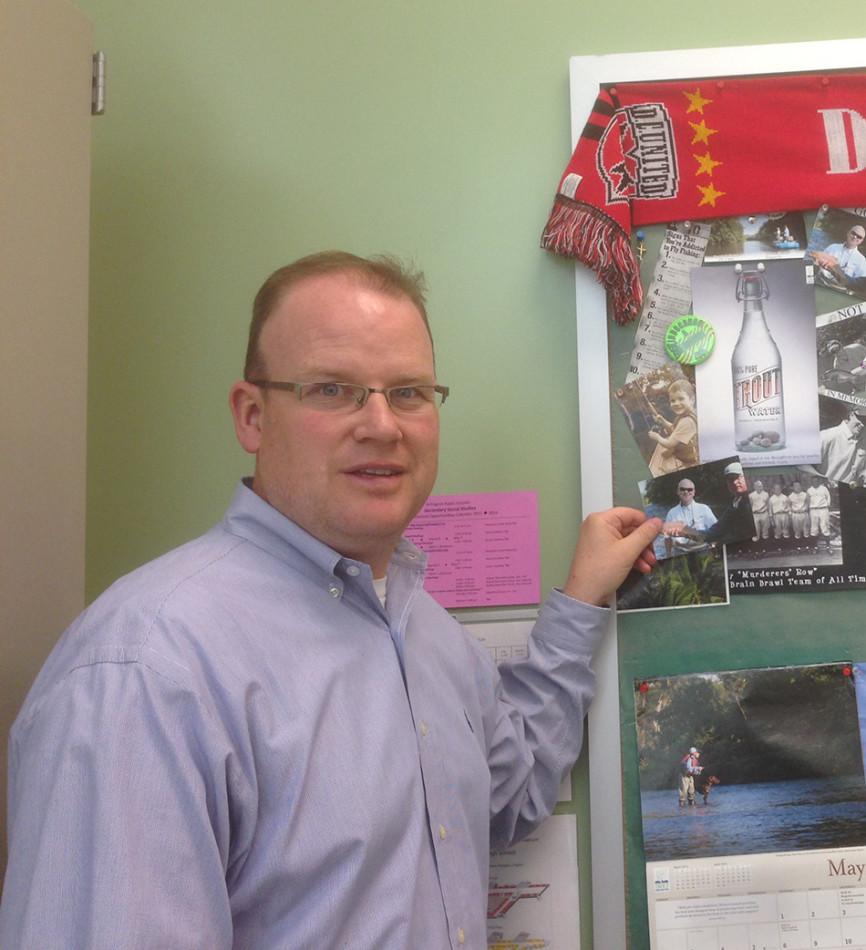 Mr. Keish shows his picture of O'D and him fishing.

Bob O’Donnell. Fatherly. Wise. Committed. Gifted. Terrific. These are the words that his former colleagues responded when asked to describe him. Whether it was writing a sports book, playing centerfield at Villanova, or teaching an English class at Wakefield High School, Mr. O’Donnell was truly passionate at whatever he was doing.

With this graduating senior class, the last students taught by this great man will be leaving Wakefield High School. He was my English 10 teacher, so I got to see the legend work first hand. As this may be my last article for the Wakefield Chieftain, I wanted to pay tribute to Mr. O’D.

Many students also don’t know that there is a tribute to Mr. O’D in the new building. The computer lab in the library is called “The Globe” after this brilliant and impactful teacher. The reason? Mr. O’D was a big fan of Shakespeare. (His knowledge of the Baird would blow you away.) As veteran History teacher Ms. Fraley said, “he was a fan of the library, books, knowledge, and language.” Although this is such a small way to thank Mr. O’D, it seems fitting because he wouldn’t have wanted a grandiose tribute. Mr. O’D didn’t like showing off.

After college, Mr. O’D used the VISTA (Volunteers in Service to America) service program to work at a prison for a year, where he implemented a GED program. Although this is such an amazing thing to do, even some of Mr. O’D’s closest friends weren’t aware of this because as veteran English teacher Mr. Burns said, he was “humble” and he “wouldn’t tell people because that wasn’t who he was.”

Mr. O’D could be described by the five “F’s” according to veteran History teacher Mr. Keish. He said that Mr. O’D, “was about his family, his faith, his friendships, furthering one’s education…and fishing.” Mr. O’D’s memory will live through every single person he touched in his life.

Whether it was about the Redskins, Capitals, or Nationals, Mr. O’D was one of the most knowledgeable fans in the D.C. area; just talking to him about sports would stun the listener because they would realize how little they actually knew next to this man. Mr. O’D was a sports writer at the Washington Times and the Fort Worth Star Telegram; plus, he even co wrote The Pro Football Chronicles.

He started teaching at Wakefield, where he inspired hundreds, even thousands of kids, as well as all of his fellow teachers. Senior Kevin Cao said that he didn’t think any teacher could help, but Mr. O’D helped him “improve [his] English.”

Whether it was playing educational games in class or just listening to him read Shakespeare, Mr. O’D knew how to keep his kids entertained and involved the entire period. Being the unassuming guy he was, he even turned down the Teacher of the Year award. He had won multiple times before, and wanted to give another teacher the opportunity to win the award.

Mr. O’D was a smart man in many different fields, so naturally, he was the perfect fit for being the “It’s Academic” team coach, and as Senior Richard Tan said, “he was a great coach” at that.

As mentioned earlier in the article, puns and pranks were a big deal in Mr. O’D’s life; he was a popular punster. “After Christmas break one year,” veteran English teacher and Department Chair Mr. Lutz said, “he was using a higher frequency of puns, and we later found out that his wife had given him a joke book as a present for Christmas.”

For Mr. O’D’s 50th birthday, a couple of teachers from the English and History department put a pile of soil in his room as a prank, signifying that he was “older than dirt.” Little pranks like this show that teachers can actually be funny, and that all of the English Department teachers were really great friends. Although, now, not many students at Wakefield know Mr. O’D, they are still affected by him through all of the teachers that knew and worked with this great scholar.

After the last day of school in the year he retired, to celebrate this retirement, a bunch of teachers went to his house to surprise him with some baseball tickets to the Nationals game that night. After his initial excitement about receiving great tickets behind home plate, veteran English teacher Mr. Brown recalls that O’D asked one simple question. “What about Dede?” Seconds later, he found out that his wife, Dede, had been in on the plan the whole time. This reaction shows a glimpse at how giving this man truly was. As AP English teacher Mr. Sharp said, “he will be remembered by the teachers that worked with him, and by his students, to hold the same standard that he held us to.”

As students end the year, and leave this grand new building, take a moment to thank the teachers who have impacted your life. Mr. O’D would have liked that.