A Pie In The Face! 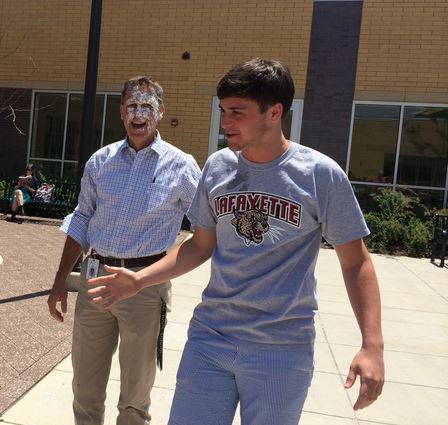 Leo and Dr. Willmore, right after Leo pied him in the face. We hope to see Leo on the graduation stage this year.

Each teacher collected money in their jar for two weeks. For every five dollars, a teacher received a “pie” in the face. During the event students or teachers could pay $2 to throw an additional pie at the teacher of their choice. Throwers were determined on a first come, first served basis.

The idea was inspired by a carnival activity some of the members of the junior class had participated in at Gunston Middle School. The fond memories of pie-ing teachers like Ms. Luxmoore and Mr. Stewart convinced this class that the fundraiser could make some good money. Juniors set the plan in motion and began to decorate jars for fundraising.

As with most first time ventures, the juniors didn’t earn as much as anticipated; however, everyone had a great time. Mr. Sharp and Mr. Burns were class favorites, earning several pies each. Ms. Wathen’s trash-talking earned her some extra pies as well.

Here is a link to the video from first lunch.

Here is a link to the video from second lunch.

One student paid nearly $20 to pie Dr. Wilmore, Ms. Wathen and Mr. Laurie. Who could pass up the opportunity to pie their teacher or principal in the face from time to time?

This fundraiser was a blast. The smell of whipped cream lingered in the air (and in participating teachers’ ear canals and nostrils) for the rest of the day. Everyone who came had loads of fun. Comment below if you’d like to see this fundraiser done next year.