Do Everything to See Anything Goes at Arena Stage 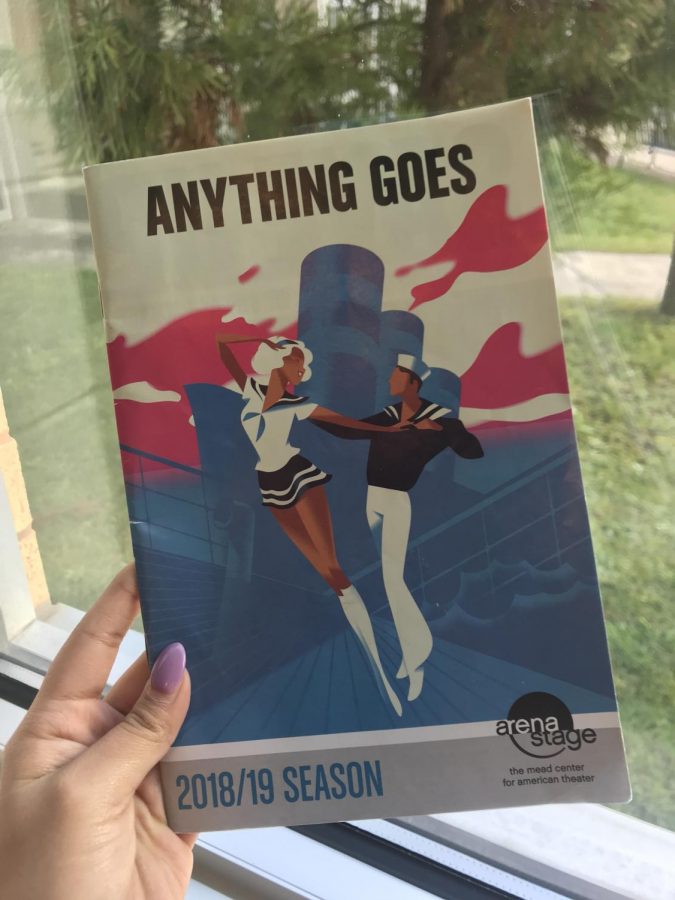 As lights dim, the string and brass instruments begin their upbeat, jazzy overture and take us back to the 1930’s. Mr. Whitney, a rich stockbroker, walks up to the bar and begins to chat away with the bartender. Within the first few minutes, the entire audience is overcome with laughter. Everyone was excited for this musical to set sail. Anything Goes is now being performed at the Arena Stage.

This show brings us aboard a boat from New York to London. We follow Billy Crocker (played by Corbin Bleu), a young man who sneaks his way on the boat, as he chases after his true love, Hope Harcourt (played by Lisa Helmi Johanson). Sneaking on board is only the beginning of his journey. Throughout the voyage, Crocker must dodge his boss, Elija Whitney (played by Thomas Adrian Simpson), who believes Billy is still in New York working, while trying to keep out of Mr. Whitney’s sight, stay onboard the ship, and convince Hope to listen to her heart and marry him. Crocker makes some unlikely friends and relies on some old ones to keep his plan moving smoothly.

While the cast did a stunning job of bringing these characters to life, this musical wouldn’t be the same without the music! All of the musicians tucked away in the orchestra pit were the perfect accompaniment to not only the actors unbelievable voices, but also to the plot itself. Throughout the show, songs filled with anger, despair, and passion were perfectly paired with the characters and their storyline. Everyone in the audience truly felt like a passenger on this ship while in their seats.

The plot alone is enough to draw an audience of all ages, but the pay your age program makes this show, and any other, even easier to enjoy. Anyone under the age of 30 can pay their age. (If you are 16, you only have to pay $16 to see this show.) With Thanksgiving and Winter break around the corner, going to see a live show is always a fun thing to do with friends and family. To purchase tickets to see Anything Goes, or any other play at the Arena Stage, click here!

As everyone rose from their seats and began clapping for the cast and crew, there was this energy in the air that all the hard work had paid off. Even today, looking back at the playbook, all the songs and dances flood back and it is no longer just a playbook, it is a memory from an unforgettable night.

Anything Goes is open now through December 23rd. Click here for times, tickets, and more information.