The Pros And Cons Of The New School 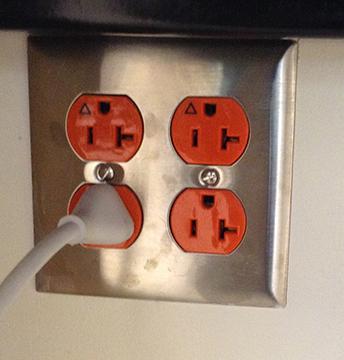 The plugs are in upside down, so there is no cute little face to look at during class.

I don’t care. I’m going to criticize the school a little bit. I’m not going to speak ill of any staff and I’m not going to be negative in any way. I’m just going to air a couple small grievances I have against some seemingly miniscule design choices the powers-that-be made over the new school. So, without further adieu, here’s some things I’ve noticed:

1. The plugs are upside down. This first one isn’t so bad. It’s just that the plugs don’t make a little face. The two little slits should be on top of the little hole. Just my personal preference really. It looks like a smiley face and i like it that particular way. When it’s upside down it looks like a face in agony. oh well.

2. In science rooms, the shower has no drain. This is kind of a biggie. in the event of a science emergency and the shower needs to be used, the water has nowhere to go. It’s just floor. I went to summer school in W-L and they recently got a new building too and i noticed that THEIR science-room-showers had a drain. I’m very observant, I notice things like this. I don’t like comparing Wakefield to any other schools but it seems like a massive oversight that drains weren’t put in place. In my opinion, It’s always better to be safe than sorry. We’re going to have a bit of a mess on our hands if there is a shower emergency in the science rooms. Of course, I’ve only noticed this in two science rooms and I haven’t been properly acquainted with all science rooms at Wakefield… but still. It’s bad.

3. HDMI plugs can get loose. This one is a bit more niche. In the auditorium and black box theater there are hdmi plugs that are installed into the wall and connect to a projector. I, personally, have had trouble with these plugs. the female end on the wall can get loose because plugs are going in and out of it making it less of a tight fit and causing it to not project on the projector. In hindsight, I feel like instead of installing a female plug into the wall, a male cable should be coming out of the wall instead. So, you can plug in a computer directly to the wall without purchasing your own cable or losing it. I don’t know whether that’s even possible but it’s just a bit of wishful thinking and it makes me feel hope for the future.

5. The driveway is confusing. Maybe this will be fixed once they’re finished with all construction but that driveway near the Dinwiddie side is very confusing. Is it only one lane? Is it two? I’m still not sure! Is it an exit? An entrance? My mom can’t make heads or tails of it!

6. By the way, make up your minds about the website blocking, guys… For a couple weeks, every audio/music website was blocked, including: Soundcloud, Playlist, Grooveshark and Pandora. Then they just came back. Either block them or not, APS. I had a very embarrassing moment where I told a friend that they were blocked and then they just proved me wrong. Get it together!

There are good design choices though! Here are some that I really like:

1. Electrical outlets EVERYWHERE! This is great. There are outlets under every table in the library, there are outlets that are level with the nooks outside the cafeteria and there are a lot more outlets in classrooms. This is especially useful if you’re like me and bring your laptop to school, so you can do work and also charge your laptop or charge your phone while you work. Phones are very important for students. If they need a ride home or they need to organize a study group, students use their phones and need those phones charged. Having an uncharged phone can be very stressful when you’re at school after hours and you need to call your mom/dad/plate of spaghetti/whoever to pick you up but you need your phone and stuff. I don’t know, ok? I like my phone and I’m sure I’m not the only one. I almost never charge my phone at school but I’m glad I can if need be.

2. Four cafeteria lines instead of just three. Lines for lunch are shorter, and if you buy lunch from the cafeteria like me, this is great. Not much to say about this one. This is unrelated, but I miss the ice cream truck. Less junk food isn’t exactly a bad thing for me, but I miss buying $1 coca-colas. Cheapest prices around…

3. Bathrooms have toilet seat covers. This is just simple and hygienic. I don’t have to place three pieces of toilet paper on a seat like some chump, I can just place a cover and it’s off to the races! Thanks, schools! You can do absolutely no wrong!

So that about wraps ‘er up. That’s all I have to say about the design of the school. There are probably more, but I can’t think of them right now. So, there. Good night.