Champions League Predictions: Who Will Move On? 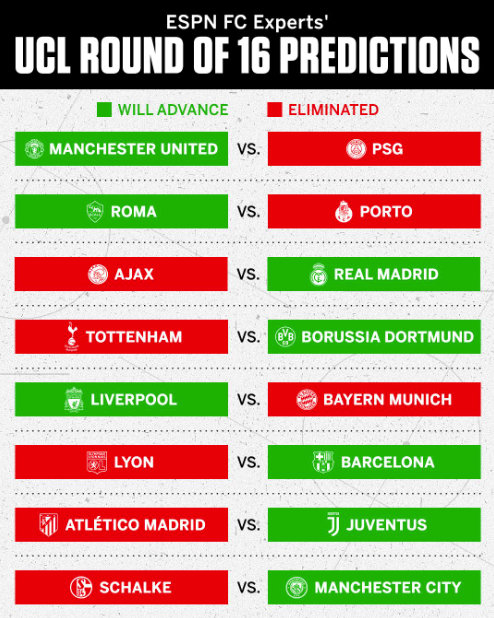 The Champions League is without a doubt the most watched soccer event in the world, besides the World Cup, and when the event reaches its knockout stage, the anticipation and passion multiplies. The draw for the Round of 16 was made months in advance and waited for impatiently.

The Second leg will be a big game. PSG won a demanding group including Liverpool, Napoli, and Red Star Belgrade, but their defeat at Anfield gives United hope. The key to stopping PSG is finding a way to frustrate their potent attack, which is Di Maria, Draxler and Mbappe are certain to shine in this match. Neymar and Cavani are both out due to an injury, but they are sure to be supporting from the sidelines. Since Neymar and Cavani are out, United have a big chance to advance.

Porto won Group D without losing any matches. Roma is working to improve as a team and prove themselves in the next matches. A player to watch is Bosnian attacker Edin Dzeko. Roma defenders should hold Algeria International Yacine Brahimi at bay. While neither club is favored to win the whole thing, Roma and Porto should produce two fun and enjoyable matches in the round of 16. Both teams can be confident, but I think Roma will edge it.

This match will definitely be interesting, featuring two well-coached teams. Dortmund has been in incredible shape this season. They have been at their strongest since the peak of the Jurgen Klopp era. They currently lead the Bundesliga by five points, and new boss Lucien Favre has them playing incredible football at the moment. Tottenham is also looking very good this season just five points behind second place Liverpool in the premier league with the amazing players such as Harry Kane, Christian Eriksen, Son Heung-min and Dele Alli leading the attack. I think Spurs can advance.

Ajax has qualified for the Champions League knockout stages for the first time in 13 years. Ajax was eight minutes away from beating Bayern Munich on last groups, only to then come from behind and secure a 3-3 draw. Real’s league place is still shaky and they are six points behind La Liga leaders Barcelona. Real will be overwhelming, but Ajax has some impressive players. Since Cristiano Ronaldo left Real Madrid, they haven’t been a remarkable team. This could be anybody’s game, but I still think Real Madrid has a chance to advise.

This could definitely be a blowout. Barcelona was especially efficient in winning their group without losing a match. They are desperate to win the Champions League this season after seeing arch-rivals Real Madrid win it three years in a row. Lyon isn’t a bad team, they are third in the French League 1 and only won one match in their Champions League group drawing five to qualify for the last 16. I still think Barcelona has a chance to advance to the next round.

Probably the most exciting game of this year, two of the biggest club going head to head. Bayern Munchen hasn’t been good this season compared to previous seasons. They are sitting five points behind Dortmund in the Bundesliga. Jurgen Klopp will relish the opportunity to take on his old rivals. Liverpool usually steps up their game even further against top opponents. Bayern Munich’s big game experience could be vital, but Liverpool should be favorites entering the field. I make Liverpool slight favorites and would fancy them to go through.

Schalke 04 vs Manchester City
Manchester City did not have things going their way during the group stage, coming away with only one point from their two meetings with Lyon. Despite this, they should be viewed as incredibly strong in this tie. Schalke 04 haven’t shown their best this season, sitting 14th place on Bundesliga, compared to their 2nd place finish last year in Bundesliga. It seems like Man City is going to crush Schalke 04.
Atletico Madrid vs Juventus

This will be the most exciting game of the year, former Real Madrid striker Cristiano Ronaldo will face Atletico Madrid on his new team Juventus. Atletico Madrid finished behind Borussia Dortmund in their group due to their head to head record. Atletico Madrid’s defensive solidity will be key against a Juventus, who is known to be full of passionate players. Juventus suffered two bad defeats at the hands of Manchester United and Young Boys, but this will be their big chance to advance to the next great achievement. Their own defensive abilities looked to have been diminished in recent times.

These crucial games will be played twice a week until March. Watch the matches here: www.uefa.com to catch all the talent. Find out which teams will advance to the Quarter-finals.