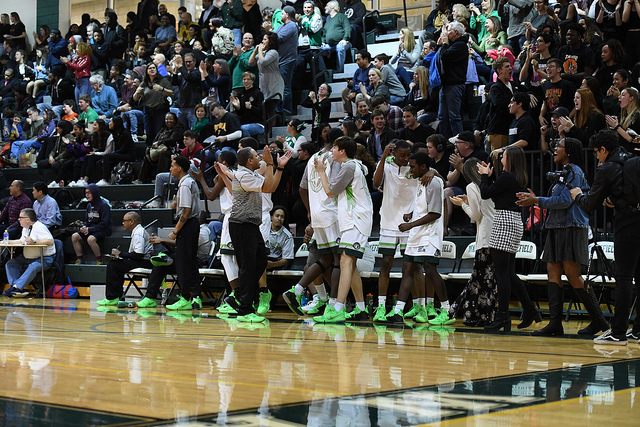 The Varsity Boys Basketball team finished the regular season with a positive record of 17-6 and a solid placement of 1st seed in their conference. Although there were bumps along the way, the boys pulled through and came out on top; they did what they had to do to set themselves up for a bright future in the playoffs.

On February 5th, the boys competed against the Lee Lancers for this season’s Senior Night. This game was one the fans will never forget. The Warriors came out strong and never slowed down until the game was over. With fantastic performances from multiple players, this game was won well before time expired. Junior and Forward Xavier Evans was a starter for this game for the first time, he said, “Starting the game makes it much more intense…The way the team plays in the beginning sets up the rest of the game.” Quite an honor to be a starter on Senior Night.

The game may be shaped around the starters, but with so much talent and only 5 spots on the court at a time, many of the talented players are forced to sit out until it is their time to defend the court. Being on the bench for Wakefield is not an insult to the players. Junior and PG Chris Cooper said, “Throughout my basketball career I never really sat on the bench this much, it’s a learning experience and it prepares me for next year.”

Wakefield ended their regular season with an intense game against the Edison Eagles that was too close for comfort. The Edison boys came out ready to compete and hung around with the Warriors until late in the fourth quarter. The Warriors pulled it together and took the lead over the Eagles and never looked back winning the game 67-61. After the final buzzer sounded at Edison, right away these players were mentally preparing for the playoffs. Senior and Guard Jared Watkins said, “We’re going to make it back to States and get a ring because everybody’s hungry.” With their hard work and potential, they have a fine shot of bringing home that title this year.

After receiving a bye in the quarter-finals, the Wakefield Warriors were set to compete in the semi-finals against the Falls Church Jaguars.  They showed up and balled on another level on both offense and defense blowing out the Jaguars, 83-38. The scoreboard was lopsided the entire game and gave the team momentum going into the Conference Championship.

The championship game will be played TODAY, February 15th @ home against their rival, the Marshall Statesmen. In the past few years Wakefield and Marshall have gone back and forth in close games. Last year, the Warriors fell short to the Statesmen in a tragic end to the district playoffs. (They went on to win the Regional Championship, so they rallied.) This year, the boys have a strong sense of revenge when going into this game. Senior Mekhi Short said, “The intensity level going into Friday is very high and there is much more pressure, with that being said, Marshall has the trophy and we want it back.”

This championship game will be the first step in the road to states. Last year, the team made it all the way to the state championship and played their hearts out, but unfortunately, they came up short. Many of the same players are on the team this year and experienced the heartbreak of losing the State Championship. After experiencing this it showed the team what they have to change this year to come out on top and go home with a state championship ring. Senior and PG Chris Warner said, “Not winning at states last year was a shock for me, it opened my eyes to what I had to change going into the playoffs this season.”

The Wakefield Warriors have gone through a rocky season with some great wins and a few tough losses against solid competition. The hard games have shaped them as a team and allowed them to come together and prepare for the tough games ahead.

The Warriors need YOU!  Come out and support them as they take on the Marshall Statesmen on their home court at Wakefield TONIGHT! @7pm. #WarriorNation

UPDATE: Wakefield lost to Marshall, 53-49. Wakefield is still in the fight for the State Championship. Players need to let this loss go and get ready for the new challenge on Tuesday at Wakefield at 7pm.