March Madness Lived up to Its Name 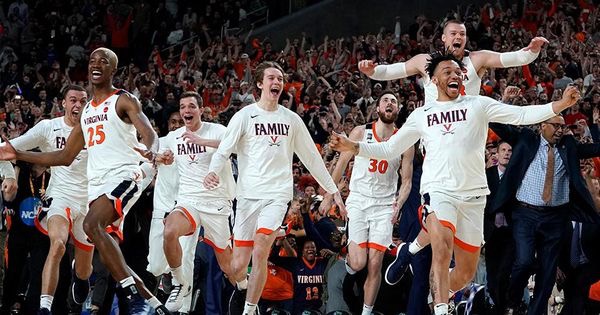 The UVA bench celebrates the win!

For all college basketball fans, March (and a little bit of April) is our Christmas. This year did not disappoint. Between painful losses of UCONN, Oregon, Mississippi St and Louisville on the women’s side, and the downfall of Duke, Purdue, Gonzaga, and UNC on the men’s side, both March Madness tournaments were crazy!

First of all, the heart and passion these women showed this past weekend was unmatched in any previous Final Four. Amalie Arena in Tampa, Florida was ROCKING. If you didn’t watch the games, here is what you missed:

Oregon vs Baylor turned out to be a much better game thanks to the one and only, Sabrina Ionescu. She lead her team with 18 points and is the ideal point guard. But the Ducks were no match for the size and power of the Baylor Bears. Lauren Cox and Kalani Brown locked down the paint on the inside and finished at the rim. Every time. The big story that came out of this game was Sabrina Ionescu’s decision to return to Oregon for her senior year instead of entering the WNBA draft a year early. See her Players’ Tribune article here.

UCONN vs Notre Dame is a rivalry that brings out the passion in both teams. The coaches have beef, the players can’t stand each other, and the fans don’t speak to each other if they can help it. Geno Auriemma and Muffet McGraw are 2 of the best coaches in women’s basketball history, so there was a lot of pressure on this game. The game went back and forth. UCONN was up by 1 at halftime thanks to a jump shot right before halftime by freshman Christyn Williams. The game went back and forth, the largest lead of the game was 6 points. Despite the close score, UCONN seemed to control most of the game, fans were getting excited at the idea of UCONN getting redemption after a shocking loss to Notre Dame last year. Unfortunately for the Huskies, the momentum swung with 2:24 left in the game. Huskies went stone cold as the Irish went on a 11-2 run to seal the deal, and punch their ticket back to the championship game.

The reigning champions, the Notre Dame Fighting Irish, were looking to join the exclusive club of schools with back to back champions. Despite their win last year, the Irish were actually the underdogs in this game thanks to the complete dominance the Baylor Bears had shown in the tournament so far. The Bears had beaten their opponents in the tournament by an average of 31 points. The Bears got off to a strong start at the beginning of the game, and led by 12 at half time. It looked like the game was secure in favor of the Bears until the end of the 3rd quarter when Kalani Brown and Lauren Cox got tied up under the hoop and Cox went down. Hard. What ever you do, do not watch the video. Remember Kevin Ware’s injury? or Gordon Hayward’s? Well, it’s not that bad, but it’s pretty close. Cox was down and wasn’t coming up. After the game, Baylor coach, Kim Mulkey told ESPN’s Holly Rowe, “Lauren Cox is the heart and soul of our team, and I just know she’s hurt because that kid would have gotten up.” After they got Cox off the court and into the locker room, the Irish made a push. They knew that without Cox, Baylor had some cracks in the armor. The Bears were up 11 going into the 4th quarter. With 5 minutes left, the game was tied. Both teams were fighting hard to bring the title back to their school. Then, with 6 seconds left, Baylor’s Chloe Jackson beat her defender and made a layup to go up 2. Timeout Notre Dame. Every fan watching was having flashbacks to last year and Arkie Ogunbowale’s buzzer beater. Could she do it again? Ogunbowale got the ball and attacked the rim, only to be fouled. Down 2 with 2 free throws. Make them and the game is tied, miss them and the game is over. As everyone held their breath, Ogunbowale missed the first free throw, and then tried to miss the second one to get the rebound, but made it on accident. Baylor was the National Champion. All the Baylor players after the game said the same thing: this was for Lauren Cox. Jackson said, “(This was) for LC (Lauren Cox), she got us here and we had to finish the job for her.” Jackson was named MVP of the game. Congrats to Coach Mulkey and the Baylor Bears!

The pure athleticism and talent that was shown in the final 3 games was incredible, but to see how much all these teams wanted to cut down the nets in Minneapolis is what set this Final Four a part. Anyone who remembers last years Final Four remembers that the games weren’t very close and the championship game was mostly a blowout. This year was how the Final Four was suppose to be!

UVA vs Auburn was neck-and-neck the entire game. Auburn’s star player Chuma Okeke torn his ACL during their Sweet 16 game vs North Carolina, so they were already down one of their best players playing against a top notch UVA team. Props to Auburn because they were a major underdog throughout the elite 8 and final 4, playing their heart out against UVA. By now you have probably heard about the controversial foul called against Auburn with almost no time left on the clock. To see the clip, click here. Now I may be a little biased as a UVA fan, but a defender may make no contact with a shooter while the shooter is in shooting motion, otherwise it is a foul. Auburn’s player clearly makes contact with UVA’s Kyle Guy. Guy goes on to hit all 3 free throws and wins the game for UVA. Ice in his veins.

Michigan St vs Texas Tech was a test of defense. Michigan St is really good at finding the cracks in the other teams armor and exploiting them, but Texas Tech has one of the best defenses in the country. Michigan State forward Kenny Goins told ESPN, “It’s like they never make mistakes.” The entire game the lead was changing hands, but it was Texas Tech that went on a run at the beginning of the 2nd half thanks to the leadership and scoring of Matt Mooney. Mooney rained threes the entire game, Michigan St just didn’t know how to stop him. The Spartans fought back and got he game within 1 point, but the Red Raiders of Texas Tech locked down in their signature defense and pulled out a win. A historic victory for the Texas Tech Men’s Basketball program.

It was Texas Tech vs UVA for the championship game. The game didn’t start until 9:20 pm on Monday night, but that wasn’t stopping many viewers from getting together with friends and watching the game. The prediction for the game was it would be a race to 50 points because both teams were so solid on defense. This proved to be true in the first half, with UVA up 32-29. In the second half, the scoring started ramping up. Texas Tech played amazing defense, frequently making UVA shoot a contested shot at the shot clock ran out. Unfortunately for Texas Tech, UVA was shooting the ball pretty well and their defense was on point. In the final minutes of the second half, the lead went back and forth, no team was up more than 1 or 2 points. With 12 seconds left, UVA’s De’Andre Hunter hit a clutch 3-pointer to tie the game. Then both teams defenses went into overdrive as they got multiple stops to keep the game tied and send it into overtime. At this point it is after 11 o’clock and most people planned to be in bed, but some fans stuck it out to the end since this game would determine the first men’s basketball championship for either school. Overtime was crazy as it became mostly a game of free throws and 3 pointers. Texas Tech went cold and couldn’t buy a bucket, so they resorted to fouling UVA players in hopes that they wouldn’t make the free throws. UVA went 12 for 12 in overtime from the free throw line and won the national championship. Congratulations to Coach Bennett and the UVA Cavilers!

What a crazy couple of final games! Both championships came down to free throws. #FreeThrowsWinChampionships What a great college basketball season. Now it’s time for the NBA Playoffs and the start of the WNBA season!