The Wakefield Chieftain • May 10, 2018 • https://whschief.com/24971/lifestyle/chicago-high-school-edition-at-professional-level/ 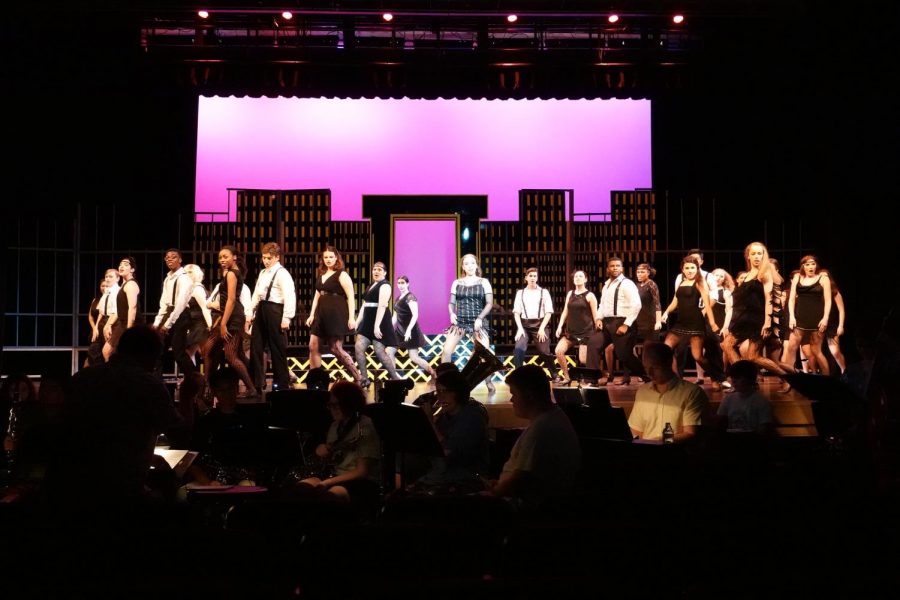 Wakefield High School is going to be the “name on everybody’s lips” with their performance of Chicago. This dazzling 1920’s murder musical was hit with a blast of 21st-century flare by the entire Wakefield cast. The story of murder mistresses, Roxie Hart and Velma Kelly, turned celebrity hot-shots is one of deceit lust guilt and vengeance, and though their crimes may be horrendous, this show is anything but that.

We follow the story of Roxie Hart (Samantha Rios) the discontent wife of the neglected mechanic, Amos Hart (Oliver Gaither). Roxie desires nothing more than to see her name in lights. After finding herself under unfortunate circumstances and nearly facing a lifetime behind bars, Roxie seeks help from the illustrious lawyer Billy Flynn (Xavier Molina) who promises fame and fortune to all of his clients with scandalous cases. In fact, his previous client Velma Kelly (Xitlalli Dawson) is in the same cell block as Roxie and a rivalry sparks right away.

Molina, Rios, and Dawson give fantastic performances and complement each other wonderfully. Standout songs from these three, include “All That Jazz,” “All I Care About is Love,” and “Nowadays.” Their vocal abilities were phenomenal and with the added element of dance, audiences were able to see the immense talent from all these young people. Oliver Gaither as the pitied and forgotten Amos Hart and Gidget Shirley as lead reporter Mary Sunshine delivered hilarious performances and great portrayals of their characters as well.

The dance performances, especially in the numbers “We Both Reached for the Gun” and “Cell Block Tango” were stand out and incorporated high-stakes stunts and elaborate choreography. The props and setting transitions contribute to the story without overwhelming viewers. The simplistic set enhanced the imagination that viewers must use. The tech department did a great job of keeping things running smoothly with few errors.

This is a show audience would not want to miss. The talent at Wakefield was incredible and this production was at a professional level. The world of Chicago was brought to life before the audience’s eyes. The story was captivating exciting and left viewers wanting to see more from the vaudeville style.