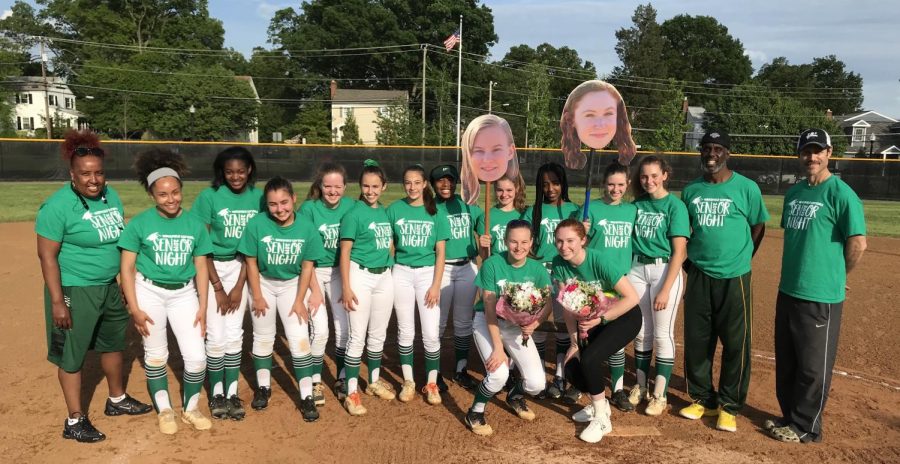 The team on Senior Night this year celebrating Amy and Shelby.

Wakefield’s Varsity Softball team had a great season! They had a record of 15-8, which is one of the best records they have had in years. The girls’ season ended in the quarterfinals of Regionals last week.

Softball is a sport where you have to depend on others to win. The team has to have a close bond to be successful. Catcher and senior Amy Kohan said she plans on going to college to to play club ball. She said she “loves being a part of a team and being able to make strong connections.” Amy’s number is 1 on her jersey. Every time she is at bat, the athletes in the dugouts, the fans, and even the announcers chant, “Number one on the field; number one in our hearts.” This shows how much they support each other.

The team stood at an overall record of 15-8 during the regular season, and had enough success in the playoffs to make it to the quarter finals of Regionals. Pitcher and junior Katie Fried said, “mentally, softball is a lot more challenging then other sports.” She does a great job of handling the mental aspects of the game in order to help her team gain points. This was obvious when Wakefield played Thomas Jefferson and Justice High School in the playoffs. Both of these games were huge victory for our Warriors.

The future looks bright for our Softball teams. Read about the JV Undefeated season here. We can’t wait to see how these players compete next season!