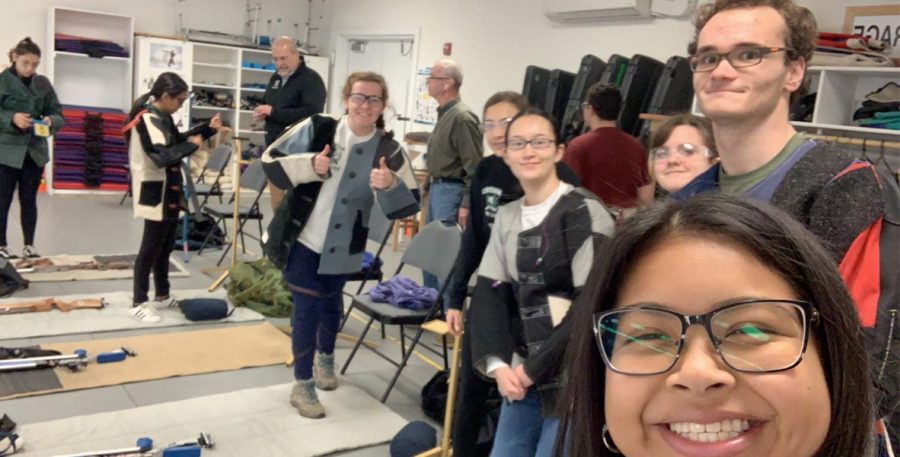 Getting ready for a match at Izaak Walton range in Centreville, VA.

Air Rifle is often overlooked when it comes to sports conversations. Most people aren’t aware of the fact that it is actually an Olympic sport, or that there is a Rifle Team is available at Wakefield.

The Wakefield Rifle team is working overtime to secure wins in their upcoming matches. Their current record is 5 wins and 2 losses. Senior Anjulina Abdon said, “We are doing really well this season. We have a lot of new players on the team. Abby Kohan is Amy’s little sister and she is carrying on the Kohan legacy; she is a really good shooter. We have a lot of fun. Everyone supports each other.”

Rifle team practices consist mainly of shooting and learning proper technique. When asked about team training, Anjulina said, “Our coaches give us tips on how to shoot properly. Most of our success comes from repetition and doing what works for you. They have helped me bounce back and have taught me resiliency.” Rifle isn’t easy, since it’s so different from other sports. Being patient and persevering while learning the basics is key.

The rifles used in competition are powered by air, not gunpowder, as some may think. The pellets that are shot are 9 millimeters in diameter. High school rifle, unlike college or international level rifle, is shot from three positions: standing, kneeling, and prone (lying down). During matches, competitors shoot from a distance of 10 meters, or about 32 feet. Each competitor shoots 10 shots from each position. A bullseye is 10 points, and the goal is to get as close as possible to a perfect score of 300. At the end of the match, the top 4 individual scores on each team are added together, which makes up the final score.

Wish them luck as they face off against Yorktown today at the Masonic Lodge in Falls Church at 5:30pm.