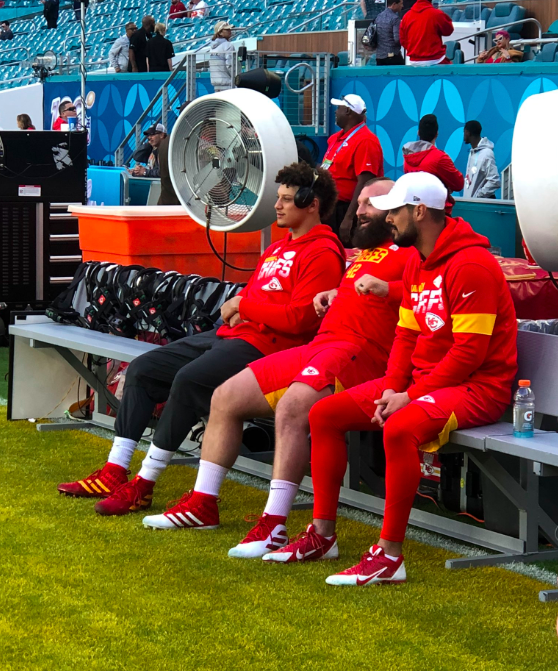 Patrick Mahomes is on the field.

This Super Bowl is about to be red hot! Chiefs! 49ers! Get your popcorn ready! Miami, Florida! February 2nd, Sunday (Today)!

The 49ers have had a storybook season this year after their QB, Jimmy Garoppolo went down with a torn ACL… against who? Against the Chiefs! During that game, he was scrambling out of bounds and landed in an awkward way, so I’m sure he’s looking for revenge! He’s going to be looking for Deebo Samuel and Emmanuel Saunders down deep this Sunday, while checking it down to George Kittle, his energetic Tight End. We will not have to worry about his explosive back, Raheem Mostert, who I’ve known was going to have a breakout season when he finally got his chance against the Packers. With over 200 rushing yards and 4 Touchdowns Plus. The defense. No joke. They will literally eat you alive! Their pass rush is loaded with players like Nick Bosa, the 2nd overall pick has not disappointed, coming up big in key situations. And Dee Ford who will also be looking for revenge playing against his former team.

But the Chiefs are not going down without a fight! Kansas City’s sizzling offense packs a powerful punch! Patrick’s paragon of the term “Gunslinger” is palpable to the fans who watch him play. His arm can get you out of any situation! He’s lucky enough to have one of the most dangerous receiving cores in the league. Tyreek Hill and Mecole Hardman with their afterburners, Watkins with his ability to get upfield. Kelce to get separation. Even though during the regular season the Chiefs have struggled defensively. During this postseason, they have dominated their opponents, especially late in the game when it matters the most.

With all that being said, bottom line, I feel as if the Chiefs are going to win it. Patrick Mahomes already has an MVP title under his belt and is hoping to add a ring to his resume. The way he leads his team is already that of a Superbowl champion, and he has led the Chiefs to their first Superbowl appearance in 50 years. I see a ring in their future.