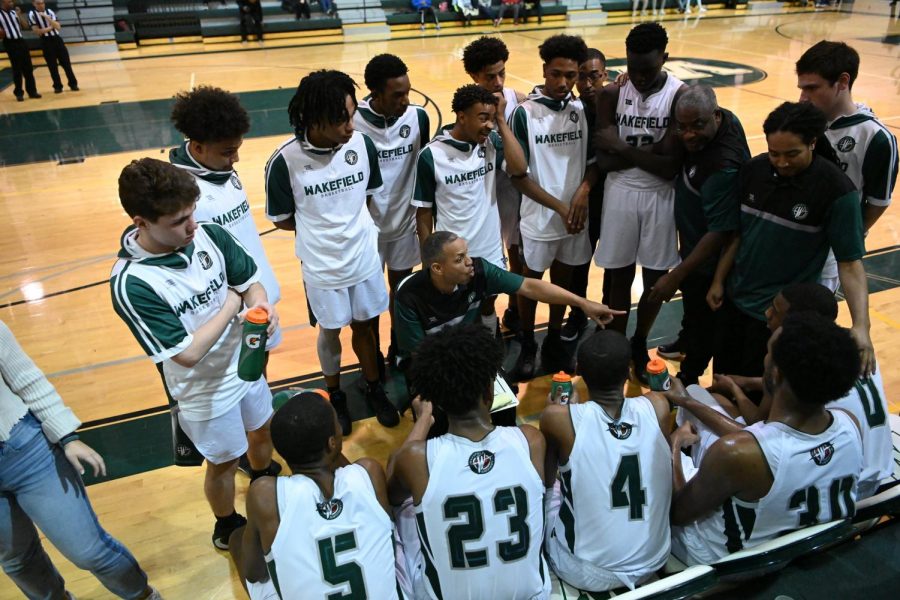 The team in a huddle at Wakefield vs. Marshall earlier this season.

There is nothing better than being in the Wakefield Gym when our Boys Varsity Basketball team is winning on the court. The crowd shouts their favorite players names. The cheerleaders lead everyone in The Wakefield Stomp. Coach Bentley is smiling and the boys are executing the plays they have been practicing all week flawlessly. That time is almost over. No matter what, Basketball will be over in less than a month. There are only 2 more games in regular season play, and the playoffs can only last until the end of this month.

The Chieftain sat down with some of our star players to see what makes them so good on the court. Everyone seems serious that their goal right now is to make it to the State Championship and win one for Coach Bentley. But, when was their first time really getting serious with Basketball?

Senior Aaron Queen said he remembers waking up in Kindergarten and being excited to “shoot every day after school”. Junior Lukai Hatcher started playing hard in elementary school, too. He has clear memories of “my mom yelling at me in the middle of the game for not listening.” She used to be his coach. Sophomore Liech Kong said he remembers, “making [my] first 3 pointers in 5th grade. I started seriously playing after that.” Senior DeAndre Parker started playing in 3rd grade, and a memorable moment was when he made his 5th grade Basketball team; “I rode the bench, but it didn’t matter because I was still playing basketball.” Take pride in your accomplishments, DeAndre. All positions are important on the team. You make a huge impact on the Wakefield Court!

*Junior Bryson Horsford started in 5th grade and all he remembers is “losing every day to his big brother.” Bryson now follows in his brother, Ben’s footsteps well, making serious moves on the court. Senior Deniche Dicks has been here 2 years and started playing in 7th grade in Atlanta. A memorable moment for Niche is “playing with my dad at 12, and him crossing me every time.” Our tallest player has been making impossible layups and dominating on offense in the last few games. Senior Treyvon Todd started to learn the game in 4th or 5th grade. He always played center, so a memorable time for him “was the first time dunking a ball in 7th grade.” We can see that at every game, now.

The two biggest influences on the court are Coach Bentley and Coach Buck. Aaron said, “Coach Buck pushes me to better myself. Lukai said, “Coach Bentley always gives me a job… he believes in me and supports me. When he talks about basketball he’ll carry it into real-life situations which makes us all take it more seriously. He would say ‘Don’t worry about the things, just take control.'” Seems like good advice on and off the court.

Based on the interview, it is obvious that these boys have a lot of love for their coaches that helped them before they touched Wakefield’s court, too. Leich said his AAU coach at the end of middle school really supported him by “pushing and encouraging me more, which made me better and helped me gain more confidence.” DeAndre had a middle school coach that made him the player he is today; “in middle school Coach Glass pushed me and believed in me which made me do better. He stayed with me through high school…he believed I had so much potential. He was that person who was there when nobody else was.”

Coaches really make a difference in our players’ lives. Bryson shared a memory of Wakefield’s JV Basketball Coach, Coach Rumber, which made all the players chuckle; “he would say ‘GUPTA’ which means get up in that…butt. That just always stuck with me, so I never give up the defense and never get comfortable with a lead.” Thanks, Coach! Niche said, “a coach that affected my basketball career was my coach from my old school. He was the only coach I’ve ever had who gave me a lot of opportunities and…helped me get out of trouble.” There is a lot of love for Basketball on this team, Wakefield.

There are 2 games left and they are very important. The team travels to Marshall tonight at 7:30pm and has their final regular season game at home next Friday, February 14th. With only two games left, every move on the court is vital. This can cause pressure to build. How do these players stay calm? Lukai said, “You have to be able to know your teammates. When I am upset, one of my teammates will pull me away and the coaches will, too.” Bryson says the pressure on the court makes him “hustle more, play harder defense, just put that energy back in the game.” Great strategy! Stay together and keep focused at Marshall tonight, Warriors!

Superfans! Show the Basketball team some love on Senior Night, 2/14 at 7:30pm!

*CORRECTION: In a previously published version of this article, we said Bryson was a sophomore. Of course, he is a junior! Apologies.