Super Tuesday: Run Down of Candidates in Running 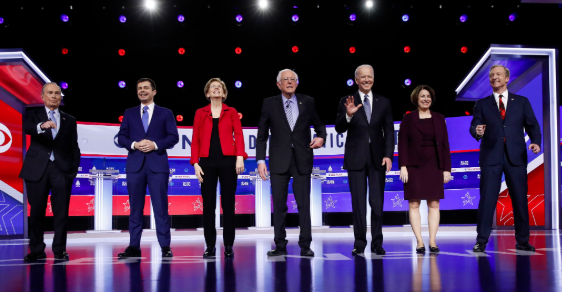 Tomorrow, March 3rd, 2020 is Super Tuesday which is when the largest amount of states hold their primaries/caucuses. How candidates do on Super Tuesday is a large indicator of who will most likely run against Trump for the next presidency.

Mayor Pete Buttigieg dropped out of the race officially as of yesterday leaving only Joe Biden, Michael Bloomberg, Amy Klobuchar, Bernie Sanders, and Elizabeth Warren as the democratic nominees. As well as Tulsi Gabbard, who is unknown and most likely will not poll well in any states.

Joe Biden is known for his position as Vice President during President Obama’s term from 2008-2016. Biden’s position with Obama has him polling higher with African American voters. One of the main stances within his presidency is his position regarding the Affordable Care Act and expand upon it. Biden also has a strong opinion regarding foreign policy and wanted to end family separation. Super Tuesday will make or break his election in seeing how black voters participate and vote in regard to Biden. He started off very weak in Iowa, but is now coming back as his candidacy relies purely on the results of Super Tuesday. Biden is known to work well with the working class and rallies his candidacy around his position during Obama’s term.

Michael Bloomberg, former republican is best known for his billionaire status and campaigning purely from his own wealth. Bloomberg joined the race more recently than other candidates and claims to have the greatest chance of defeating Trump in regard to his wealth. Although Bloomberg has said many questionable things regarding women and the Stop and Frisk policy he claims to be a huge advocate for gun control, climate change, and overall helping to defeat Trump in the upcoming election. Bloomberg is a more moderate candidate for the party but thus far has the delegates and support to come out on top.

Amy Klobuchar is a senator from Minnesota and another more moderate candidate. Klobuchar runs as a progressive but not aggressive democrat. She leads more in the Midwest and doesn’t mention the class issues as much as other candidates. Klobuchar gained lots of attention during Kavanaugh’s trial as she questioned him during his hearing. Klobuchar attracts more female moderate voters who want to take back the democracy.

Bernie Sanders is known as a democratic and self associated socialist candidate who ran against Hilary Clinton back in 2016 and lost. However, Sanders has been polling the highest recently and his extremely liberal views are paying off for him. Sanders’s biggest known issues are his fight for wealth equality, free college, and Medicare for all. His overall fight is against inequality. Sanders is the most liberal candidate to most and that will either hurt or benefit him.

Elizabeth Warren is the final candidate and another more liberal nominee. Warren recently visited Wakefield to address her policies as well as express her opinions on the Bloomberg campaign and how we should not replace one billionaire with another. Warren, similar to Sanders bases her campaign on more liberal issues regarding inequality, class differences and issues with billionaires. Warren claims to have an extremely valid plan to restructure and reshape the economy for the better and makes that one of her known issues. Warren was a strong and well-known candidate before the primaries began, and she didn’t do as well as expected in Iowa, and other states, and slowly falls behind.

The 2020 Democratic candidates are all competing for one spot. It is anybody’s race for the Democratic Presidential Nomination. The goal of all Democrats should be to support whoever comes out on top and vote to get Trump out. Each candidate has a new rant as to why they can beat Trump, but in the end, it can and will come down to the voters’ support.

The Republican race has a clear winner for its nomination. Although William F. Weld is running against Trump, he will not be the Republican candidate. Trump will be the Republican Presidential nominee. To see how Trump handles policy, pay attention to how he is handling the Coronavirus epidemic.

Super Tuesday is tomorrow, and if you have registered to vote, bring your voter ID and a picture ID to your registered voting location and cast your vote for the candidate you feel strongest towards. Super Tuesday will make or break these last few candidates’ campaigns.

We will then be in the final stretch to discovering who will be the 2020 Democratic Presidential nominee. We will finally find out who will run against Trump.

To read more about each candidate and decide who will get your vote, click here.