The VP Debate: What You Missed 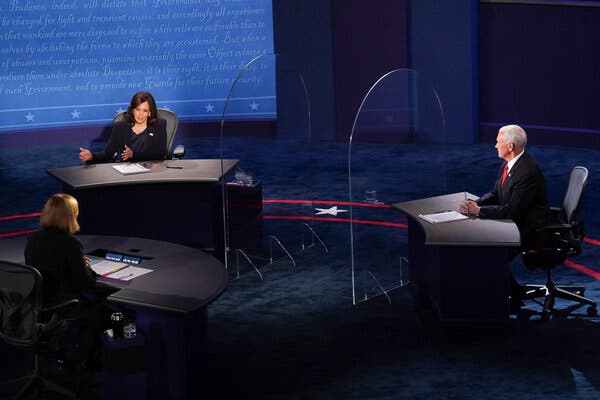 Wednesday night, the first and only Vice Presidential debate of 2020 happened. After last week’s Presidential debate, widely regarded as one of the worst debates in American history (described by Jake Tapper as “a hot mess, inside a dumpster fire, inside a train wreck”), a lot of people were anxiously awaiting the debate of the VPs. This debate was much more civil, though admittedly the bar was low.

The candidates got equal speaking time, with less interruptions and yelling than the first Presidential debate. Here’s what you missed.

The first topic of the debate was COVID-19, more specifically, the Trump administration’s handling of COVID-19. Kamala Harris brought up the 200,000+ deaths in the U.S. as a result of the virus, and attacked the Trump administration for not informing the public of danger as soon as they knew about it. Mike Pence retaliated by saying Trump put American health first, and quarantined the initial incoming people who tested positive for COVID-19 back in March. Harris said the handling of the virus “clearly hasn’t worked.”

Moving to the safety guidelines surrounding the pandemic, Pence thanks the American people for the sacrifices they’ve made. Harris then attacked him for the current administration not telling the truth to Americans. When asked a question about if the VPs have had a conversation with Biden and Trump, respectively, about presidential disability, both candidates avoided the question, neither one really answering. Pence then returned the conversation to vaccines, and went after the H1N1/Swine Flu pandemic infection rate under the Obama administration.

The next topic discussed was transparency from people in leadership positions. Harris attacked the Trump administration for hiding information about Donald Trump’s health from the American people, and emphasized that Americans have a right to know about the president’s taxes, as well.

From there, the debate moved into climate change. The word “fracking” was thrown around a lot. (Fracking is a method of extracting oil or natural gas from the earth. This process is harmful to the environment, but also keeps a lot of people employed.) Both Harris and Pence said that under each administration, fracking would not be banned.

The candidates were then asked about the issue of Roe V. Wade. Mike Pence responded by talking about the new Supreme Court nominee, and saying that he hopes she will not be attacked for her Christian faith and treated the same way as Brett Kavanaugh was during his nomination. Kamala Harris assured the viewers that she will always fight for a woman’s right to make a choice for her own body, while Pence said he is pro-life and will not apologize for it.

The debate, nearing its end, shifted into the discussion of race. Breonna Taylor, a Black woman who was shot and killed by police on March 13, was brought up. Both candidates gave their condolences. Pence then said that he “trusts the justice system.” Following this, he expressed that he thinks the notion that there is systemic racism and bias within the justice system is insulting. At this exact moment, The Infamous Fly settled into Pence’s hair and stayed there for 2 minutes.

The last question came from an 8th grader in Utah: “If our leaders can’t get along, how are our citizens supposed to get along?” The debate closed with Pence telling this child not to assume that what she sees on TV represents the American people, and Harris talked about how she loves hearing from the future leaders of the U.S.A.

The Top 3 Most Meme-able Moments

When talking about systematic racism not existing, a fly landed on Pence’s hair and stayed there for more than 2 minutes. The memes started popping up immediately, and they’re still coming.

Another part of the debate people loved was the facial expressions made by Harris. She gave Pence looks that many compared to how a parent would look at their child who is in trouble.

Overall, the Vice Presidential debate was better than last week’s, but it probably won’t have too much of an effect on the election. The next Presidential Debate is under debate. It was scheduled for next Wednesday.

If you can vote, vote! It’s more important than ever that your voice be heard.